Is Christmas cancelled in Cairo? 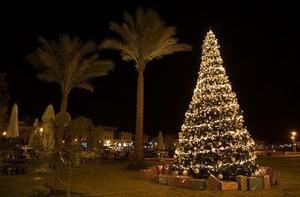 Tourism officials have claimed that 50 per cent of all reservations made in Egyptian hotels for the Christmas season have been cancelled, especially in Cairo, which has seen high levels of violence and political instability. Hotels in Hurghada and Sharm Al-Sheikh on the other hand are expected to retain 90 per cent of all their hotel reservations.

Handi Taha, general director of the Select Egypt Tour Company, said most tourists began making reservations in Egyptian hotels for the Christmas season between June and October of this year. He added that since the outbreak of violence by the presidential palace and on Mohamed Mahmoud Street, nearly 50 per cent of these reservations have been cancelled.
Taha added that cancellations were highest amongst, British, American, Italian and German tourists, and that the number of late reservations made in the beginning of December was less than that made in previous years. Hotels in Cairo, Aswan and Luxor during last year’s Christmas season were filled to 40 per cent of total capacity, however that number is expected to drop to 30 per cent this year.
Hotels in Hurghada on the other hand were expected to be filled from anywhere between 90 to 100 per cent capacity, the highest rate so far witnessed in that city. Hurghada was followed by Sharm Al-Sheikh, whose hotels were expected to be filled to 800 per cent of total capacity.
Taha added that reservation prices for hotels in Cairo, Aswan and Luxor were expected to drop by 20 per cent, while prices at hotels in Hurghada and Sharm Al-Sheikh were not expected to change from that of the previous year.
He stated that a one night stay at a five star hotel that includes New Year’s dinner in Sharm Al-Sheikh or Hurghada was expected to cost $150, while the cost of a one night stay at a 4 star hotel was $90.
This is in comparison to five-star hotels that provide a New Year’s Dinner in Cairo, Aswan and Luxor whose cost per night was estimated to $130. Four-star hotels in those cities were expected to cost anywhere between $60 and $70 per night.
Nader Ayyad, a member of Egypt’s Chamber of Tourist Companies and Travel Agencies, and general director of the tourist company Red Sea, stated that the number of tourists staying in hotels in Cairo, Aswan and Luxor could be even lower than expected. He predicted that many of these hotels would only be filled to 15 per cent or 20 per cent of total capacity. He further stated that a majority of those reservations made for Cairo were most likely for photographers and journalists coming to report on the country’s political situation.
Ayyad predicted that hotels in Sharm Al-Sheikh and Hurghada would be filled to 50 per cent of capacity compared to 70 per cent during last year’s Christmas season, a number he said was good considering the increase in political instability in Egypt over the last several weeks.
Tweet
Pope Shenouda Article