If approved, Egypt’s new constitution would be a step back into the Mubarak era 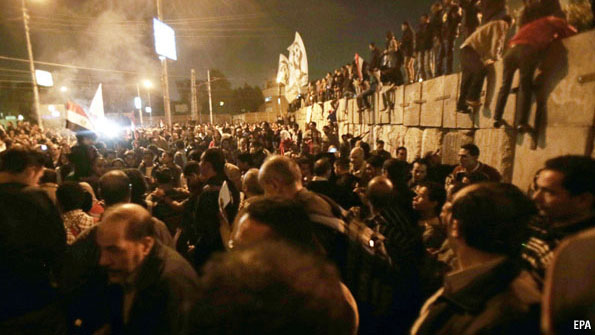 The choice looks simple. Over the coming week Egypt’s electorate of 51m will have the opportunity to vote yes or no to a new constitution. A healthy blast of political advertising floods airwaves, billboards and the internet. Yet this is no cheery exercise in democracy. Seldom has any nation confronted so momentous a question at a time of such polarisation.

Rival marches of supporters and opponents of President Muhammad Morsi, vicious street battles and sectarian taunting suggest that any outcome of the referendum will leave many Egyptians deeply embittered. The political tension is aggravated by economic woes. Trapped between his own haste to ram through the vote and a deadline for the IMF to approve a rescue package, Mr Morsi has undermined confidence in Egypt’s foundering economy by announcing, then abruptly rescinding, a set of sweeping tax rises.
Should Egyptians approve the constitution, their country could become a very different place. In outline the new draft differs little from the constitution that prevailed until the fall of Hosni Mubarak’s regime. Like the old version it enshrines a powerful presidency and an overweening state, with an elected two-house legislature and an independent judiciary. Its 234 articles contain familiar talk of civic freedoms, individual rights, family values and national identity. Where it differs is in the details, which could give Mr Morsi’s party, the Muslim Brotherhood, a grip on power not unlike that enjoyed by Mr Mubarak.
Some parts of the draft provide improved guarantees, such as the one against arbitrary detention. Other bits are vague or contradictory. Workers have the right to form unions freely, proclaims one article, but the next limits them to one union per profession. Freedom of religion is guaranteed, but any insult to prophets will be punished. Article two says that “the principles of Islamic sharia” are the main source of legislation. Yet article four now says that the scholars of Al Azhar, an Islamic university, should interpret sharia, not parliament or the courts. A further clause defines those principles in rigid doctrinal terms.
Dozens of articles leave key matters to be defined by law. The constitution does not say whether provincial governors will be elected or centrally appointed, as in the dictatorial past. By contrast, a privileged role for the military is made disturbingly explicit. The army, headed by a defence minister who must be a serving officer, controls its own budget and operations, retaining a right to arrest and try civilians. Egypt’s sole legislative body, until elections fill the currently disbanded lower house of parliament, would be the upper house. Elected on a turnout of just 7%, it has an 83% Islamist majority.
Yet more important than the constitution’s numerous flaws is the context in which it is being proposed. When Mr Morsi captured the presidency in June by a slim margin, he signalled magnanimity by formally quitting the Muslim Brotherhood and appointing a largely technocratic government. Egyptians cheered in August when he removed the domineering generals who had shakily guided the post-revolutionary transition. But Mr Morsi has proven equally erratic and domineering. The Brotherhood, meanwhile, has infiltrated state institutions. It has tried to shape the message of the state-owned press, arranged for its members to distribute government-subsidised goods, and quietly scaled back family-planning programmes.
Reneging on a promise of inclusiveness, Mr Morsi brushed aside calls to widen the composition of the body that wrote the constitution. He ignored the resignation of nearly all its non-Islamist members, rushed the draft to approval in a single, bizarre overnight session and ordered a referendum to approve it. As opponents took to the streets, Mr Morsi’s supporters responded by blockading the Supreme Constitutional Court, and have picketed a complex that houses much of Egypt’s independent broadcast media.
It remains unclear whether independent observers will monitor the vote. The body that vets their applications is dominated by Islamists following the resignation of a third of its members, and also happens to be headed by the same man who ran Mr Morsi’s constitution-writing panel.
If the vote is a fair one, and it goes against Mr Morsi, Egyptians will be asked to elect a new constituent assembly to begin the process of drafting a constitution all over again. Mr Morsi would be deeply damaged, but remain in power uncurbed by any legislature. Given doubts over his leadership and Egypt’s other troubles, this is an alarming prospect. Sensing this, the Brotherhood is running adverts featuring Safwat Hegazi, a preacher famed for throat-catching sobs, grinning broadly and saying, “Vote yes and relax.”
Tweet
Pope Shenouda Article