Egypt's constitution hangs in balance as judges face off against Morsi

by the Christian Science Monitor 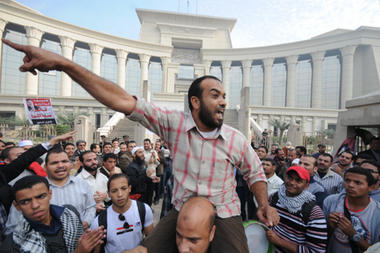 On Sunday, Egypt’s highest court suspended its work in protest over perceived pressure after Islamist demonstrators gathered outside the courthouse. Later in the day, the national judges union followed up by calling on its members not to monitor the referendum to pass the Constitution into force.

The showdown between the judges and the Muslim Brotherhood-backed President Mohamed Morsi is the latest wrinkle in the unfolding battle to define Egypt's new constitution, and more broadly over how power will be divided as Egypt moves forward. President Morsi has scheduled a referendum for Dec. 15 on Egypt's new constitution, drafted by Islamists over the objections of Egyptian secularists and leftists.
“This is an institutional clash between ... two major powers within the state,” says Ziad Abdel Tawab, deputy director of the Cairo Institute for Human Rights Studies. “This is something very abnormal, shouldn’t be happening, and no one knows what the result will be.”
The judges union decision to boycott monitoring the referendum is not binding for members and it is unclear how widespread the boycott will be. Government-controlled media report today that Egypt's Supreme Judicial Council has decided to monitor the vote, though there's been no independent confirmation of that as yet.
If the judicial council had sided with the judges union, preparations for the referendum would have been stalled. “This is where we can safely say it will jeopardize the integrity of the elections,” Mr. Abdel Tawab said.
At the moment, it appears planning will lurch forward, with individual judges participating or not based on their conscience. Judicial monitoring of elections is required in Egypt, and if enough judges boycott then Egypt will not be able to hold the referendum. “That’s very unlikely to happen,” says Shadi Hamid, director of research for the Brookings Doha Center. “I think ultimately, there are going to be enough judges to supervise the elections.”
Ruling by decree
But if that is not the case, Mr. Abdel Tawab says President Morsi could issue a new constitutional declaration that would allow him to hold a referendum without judicial oversight, although there has been no official statement regarding the issue.
Currently, Egypt is running under the authority of a decree issued by Morsi that gave him a free hand legally and politically until a new constitution is approved and removed his own decisions from judicial review.
That's the essence of the problem. The draft constitution is seen by part of Egypt's population as an attempted Islamist imposition on society and therefore illegitimate. But the persistence of a situation where Morsi can make up his own rules on the fly is even worse. Some are hoping that the pressure from the judiciary could drive the Muslim Brotherhood and Morsi to make concessions to draw broader national support for the document.
“If the judges hold out and that presents a problem for the holding of the referendum, that’s where a compromise might become necessary,” Dr. Hamid says. “There could be some discussions and negotiations around that in order to ensure there is judicial supervision, but I don’t see any kind of grand bargain or compromise on fundamental issues dividing the opposing camps."
“Obviously the polarization we’re seeing in Egypt today is unprecedented and there are no signs of a compromise to bring the sides closer together,” he adds.
On Sunday, judges of the Supreme Constitutional Court suspended their work after claiming Islamist protesters supporting Morsi prevented the judges from entering their building, calling it the “judiciary’s blackest day on record.” The court was expected to rule on the legality of the upper house of parliament and the constituent assembly that drafted the nation’s new draft constitution, which could pose an open affront to President Morsi.
Morsi has framed his current sweeping powers as necessary to achieve stability and safeguard democracy: Egyptian courts dissolved the first constituent assembly and an elected parliament earlier this year on technical grounds, and Morsi and his camp said that democratically-elected institutions are threatened by old regime loyalists in the judiciary and other parts of the bureaucracy.
Opponents, however, accuse Morsi of seizing too much control nearly two years after the overthrow of Hosni Mubarak.
Tweet
Pope Shenouda Article