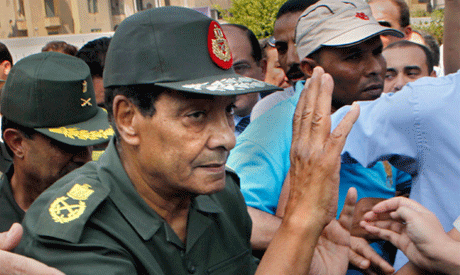 Armed forces spokesperson Ahmed Ali announced Saturday that a highway will be named after Field Marshal Hussein Tantawi in appreciation of his efforts during the transitional period between the toppling Hosni Mubarak in the wake of the January 25 Revolution and the inauguration of President Mohamed Morsi on 30 June.

"The new highway, initially untitled, was constructed by the armed forces in May 2012 by order of the Field Marshal," said Ali via his official Facebook page.
The road was built in an attempt to ease traffic jams in both Nasr City and Moqattam, Ali said.
Ali denied any claims that the road, now named after Tantawi, previously carried the name "the Martyrs," explaining that the latter is a different road that was built in 2004.
News of the honorary naming was received with discontent by anti-military rule activists on Twitter.
"President Morsi, after naming the highway after Tantawi, I advise you to name Mohamed Mahmoud Street after Sami Anan [former chief of staff]," said liberal activist and former Minister of Communication Hazem Abdel Azim, referring to the renowned street that witnessed fierce clashes last November between peaceful protesters and Central Security Forces leaving 47 dead and thousands injured.
Activist Ahmed Douma, who was detained during the Cabinet office clashes in December 2011, described the decision of naming the road after Tantawi as "the last proof for our authority's impudence."
Activist and co-founder of No to Military Trials campaign, Mona Seif, told Ahram Online that the decision made her furious as she was expecting Tantawi to face trial, not be honoured and celebrated.
"Of course I'm angry; I'm angry because of all the victims of military trials, who Tantawi is directly responsible for, and for all the martyrs that died under his rule," she added.
Seif went on to say that even the road's billboard is provocative for its being hung next to another that reads "The Martyrs Highroad."
During the transitional period, a total of 11,879 Egyptians were detained by the military, according to figures issued by the No to Military Trials campaign.
Tantawi, who was ordered to retire by the president on 12 August, is being investigated for his role in the killing of at least 24 protesters during a Coptic Christian protest at Maspero on 9 October 2011.
On 14 August, President Morsi honoured him along with formed Chief of Staff Sami Anan, in addition to appointing them as advisors.
Tweet
Pope Shenouda Article