Witness: U.S. ambassador was breathing when found after Benghazi attack 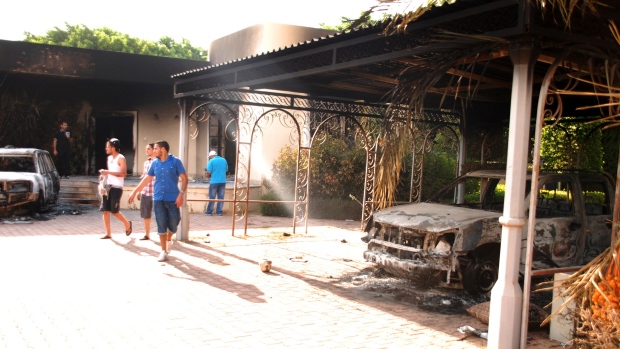 U.S. ambassador Chris Stevens was still breathing when Libyans stumbled across him inside a room in the American Consulate in Benghazi, cheering, "Alive, alive" and "God is great" when they discovered he was still breathing and then trying to rescue him after last week's deadly attack in the eastern Libyan city, witnesses told The Associated Press on Monday.

Fahd al-Bakoush, a freelance videographer, was among the Libyan civilians roaming freely through the consulate after gunmen and protesters rampaged through it last Tuesday night. Al-Bakoush said he heard someone call out that he had tripped over a dead body.
A group of people gathered as several men pulled the seemingly lifeless form from the room. They saw he was alive and a foreigner, though no one knew who he was, al-Bakoush said.
He was breathing and his eyelids flickered, he said. "He was alive," he said. "No doubt. His face was blackened and he was like a paralyzed person."
Video taken by al-Bakoush and posted on YouTube shows Stevens being carried out of a dark room through a window with a raised shutter by a crowd of men. "The man is alive. Move out of the way," others shout. "Just bring him out, man."
"Move, move, he is still alive!"
"Alive, Alive! God is great," the crowd erupts, while someone calls to take Stevens to a car.
The next scene shows Stevens lying on a tile floor, with one man touching his neck to check his pulse.
The video has been authenticated since Stevens' face is clearly visible and he is wearing the same white t-shirt seen in authenticated photos of him being carried away on another man's shoulders, presumably moments later. Two colleagues of al-Bakoush who also witnessed the scene confirmed that he took the footage.
Stevens and three other Americans were killed in the attack on the consulate, part of a wave of assaults on U.S. diplomatic missions in Muslim countries over a low-budget movie made in the United States that denigrates the Prophet Muhammad.
The accounts of all three witnesses mesh with that of the doctor who treated Stevens that night. Last week, the doctor told The Associated Press that Stevens was nearly lifeless when he was brought by Libyans, with no other Americans around, to the Benghazi hospital where he worked. He said Stevens had severe asphyxia from the smoke and that he tried to resuscitate him with no success. Only later did security officials confirm it was Stevens.
A freelance photographer who was with al-Bakoush at the scene, Abdel-Qader Fadl, said Stevens was unconscious and "maybe moved his head, but only once."
Ahmed Shams, a 22-year-old arts student who works with the two, said the group cried out "God is great" in celebration after discovering he wasn't dead. "We were happy to see him alive. The youth tried to rescue him. But there was no security, no ambulances, nothing to help," he said.
The men carried Stevens to a private car to drive him to the hospital since there was no ambulance, all three witnesses said.
Tweet
Pope Shenouda Article