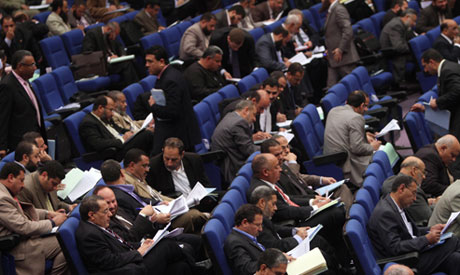 The moderate Islamist Wasat Party said on Saturday it will nominate two of its members as representatives in the constituent assembly (CA), including the party's head, Abul-Ela Maady, and deputy party head MP Essam Sultan.

Wasat spokesperson Amr Farouq added that the party's general secretary, Mohamed Abdel-Latif, and its deputy general secretariat, Iman Qandeel, have been chosen as potential substitutes for its first choice of representatives.
The party sent a letter to inform Parliament speaker Saad El-Katatni of its decision, Farouq said.
A meeting of representatives of various political parties and forces agreed on Thursday morning, after seven hours of heated negotiations, on a 50-50 ratio of Islamist to non-Islamist members in the CA  tasked with writing Egypt's post-Mubarak constitution.
The agreement assigned 39 of the 100 seats on the assembly would be assigned proportionally to political parties which has representation in parliament.
The Islamist bloc, headed by the Brotherhood's FJP and the Salafist Nour Party, had initially demanded to table 55 members in order to reflect the fact that Islamists secured nearly two-thirds of the seats in parliament in the November 2011 elections.
However, under a deadline from the ruling military council which was set for Thursday, a 50-50 ratio of Islamist to non-Islamist members in the CA was agreed upon after painstaking negotiations between various parties
The Muslim Brotherhood's Freedom and Justice Party (FJP) will hold 16; the Salafist El-Nour Party eight; the liberal Wafd Party five; the Free Egyptians Party two; the Egyptian Social Democratic Party two; and one each for the Wasat Party, the Nasserist Karama Party, the Socialist Popular Alliance Party, the liberal Reform and Development Party and the Islamist Building and Development Party.
It was also agreed that the CA will include: 15 judges, nine religious figures — five from Al-Azhar and four from Christian churches — 10 public figures, 10 revolutionary youth (women and men), seven members of workers and farmers unions, seven members of professional syndicates, a representative from the police, another from the army and one from the Ministry of Justice.
Other parties and institutions, which will co-write the constitution, have also started to send letters with their nominations for the assmbly's membership to El-Katatani.
Al Azhar presented 5 nominees for its 5 seats including the former Grand Mufti of Egypt Mohamed Nasr Farid Wasel,  who was also a member in the former constituent assembly.
The Orthodox Church of Alexandria presented a list of 21 nominees for its 3 slots, including businessman and the liberal Free Egyptians Party founder Naguib Sawiris , Bishop Moussa of Youth Bishopric and former MP Georgette Kellini.
On the other hand, the Catholic Church presented a list of 4 Constitutional experts to the committee as nominees instead of presenting a list of Church men for its single seat in the CA.
The National Council of Women (NCW) nominated Judge Tahany El-Gabaly , the vice president of the High Constitutional court. The nomination of El-Gabaly, however, drew criticism from some quarters due to her pro-SCAF views as well as her past connections with the former Mubarak’s regime.
The Federation of Egypt chambers of commerce (FECOC) presented its 3 nominees for members of the CA who would represent businessmen and industrialists. The nominees include businessman Ibrahim Al Araby, businessman Mohamed El-Masry , the chairman of Port Said chamber of commerce, and Ibrahim Abu El-eyoun , the chairman of Assuit Chamber of commerce.
Each article of the constitution is to be approved by consensus; if consensus could not be reached then the issue at dispute would require the approval of 67 members. If this ratio cannot be obtained then the vote will be delayed for 48 hours, after which the article can be passed by a 57-member majority.
Field Marshal Mohamed Hussein Tantawi, the head of the ruling military council, officially called upon both houses of parliament (the People's Assembly and Shura Council) to convene Tuesday to choose CA members.
Tweet
Pope Shenouda Article