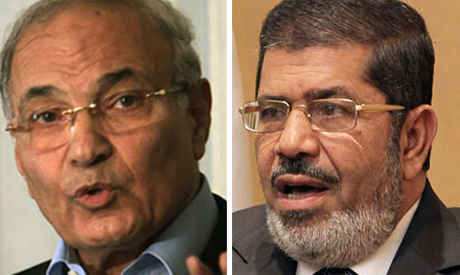 The outcome of the first round of presidential elections, which started for Egyptian expats overseas 11 May and in Egypt 23-24 May, has excluded the two frontrunners of the pre-elections phase: Amr Moussa, who was put first by many opinion polls, and Abdel Moneim Abul-Fotouh, who was routinely placed a close second.

Instead, Moussa, a former foreign minister and Arab League secretary general, lost the bulk of his vote — including the larger part of the Coptic vote and those of the Sufis — to Ahmed Shafiq. For his part, Abul-Fotouh, a former prominent member of the Muslim Brotherhood who was expelled over an early unilateral decision to run in the presidential race, lost many of his presumed supporters among Salafists — whose earlier declared support for the Brotherhood renegade deprived him of a good chunk of the liberal and left-wing vote — to the Brotherhood's candidate, Mohamed Mursi.
Now Shafiq, Mubarak's last prime minister, will face off with Mursi, the Brotherhood's candidate, in an elections second round 16-17 June.
"At the end of the day we are faced with the same old equation of a runner from the Muslim Brotherhood and a runner supported by the defunct NDP (National Democratic Party) and its adjacent forces," commented Amr El-Choubaki, a senior political analyst at Al-Ahram Centre for Political and Strategic Studies.
The choice is between a rock and a hard place, according to most political analysts and nearly all activists.
Mursi, El-Choubaki further explains, is the candidate of a political Islamic group that has a long and wide base of support but that has shrugged off state laws when it declined to regulate its status as an NGO. This, he says, does not augur well about the kind of state they would seek, "simply because their point of departure is that they are above the law."
Shafiq, for El-Choubaki, is not much of a choice either given that he was the last prime minister of ousted president Hosni Mubarak and is supported by the security apparatus and state bodies that had for long kept the Mubarak regime in power. "One cannot ignore the direct and heavy support that Shafiq received from the base group of the defunct NDP," El-Choubaki comments.
On Saturday, as early results made it clear that it will most likely be Mursi running against Shafiq in June, each side was trying to attract as much support as possible. The Muslim Brotherhood has reached out to all the key presidential runners and to top political figures in an attempt to build a national consensus that could help their candidate make it to the presidential seat as an anti-old regime figure.
However, three of the key former candidates, Hamdeen Sabbahi, Abul-Fotouh and Moussa, declined an invitation Saturday by the Brotherhood to form a united front against Shafiq, saying they found the agenda for the proposed meeting to discuss the matter unclear.
Meanwhile, several political forces said that what they want from the Muslim Brotherhood is honorary seats, such as two vice president positions or some ministerial seats, but a clear commitment in relation to drafting the constitution on a true reconciliatory basis, as well as the adoption of a participatory approach towards state management.
"We had said that we are open to examining all the demands of the national forces and to reach reconciliatory deals," noted leading Muslim Brotherhood figure Essam El-Erian. According to El-Erian, the Brotherhood is trying to assuade fears because it "believes in the true value of a national consensus."
The abovementioned meeting that was scheduled to take place Saturday evening was designed to offer assurances by the Muslim Brotherhood to concerned political forces. "But this meeting has not picked up steam because the Muslim Brotherhood are not showing enough seriousness in committing to the demands of the political forces," said a public figure who has actively supported the national reconciliation line that the Brotherhood is promoting.
Several other public figures offered to cooperate in giving a push to the construction of a national coalition on the basis of the Muslim Brotherhood's commitment to a clear and watertight document whereby all the demands of the national forces are accommodated.
"We have our worries over the intentions of the Muslim Brotherhood, but we cannot overlook the fact that Shafiq is the candidate of the defunct ruling party," said one of the public figures who has been trying to solicit the support of other leading public figures and former presidential runners to join the call of the Muslim Brotherhood.
On the other side of the fence, Abdallah Abdel-Salam, the former member of the NDP and political analyst, told Ahram Online that he sees nothing wrong with the fact that Shafiq has the support of the still-existing machinery of the state as well as key interest groups, including top businessmen of the former NDP.
For Abdel-Sallam, it was Mubarak who was toppled but the state itself survived, and if Shafiq is ultimately elected president then he would have to rule in line with the new political facts on the ground. "Shafiq will not at all try to reinstitute the old regime as many people fear; he would rather try to assure all those who are scared that he is a president of all Egyptians; he will even reach out to some of the revolutionary figures to build up a national consensus," Abdel-Salam forecasted.
A similar line is coming out of Muslim Brotherhood quarters on what Mursi has in mind. "Mohamed Mursi is already making his round of calls with representatives of all national forces to affirm his intention of being a president of all Egyptians, without the exclusion of any political force except those hardcore groups of the ousted regime," said Hamdi Hassan, a key member of the Muslim Brotherhood.
For many revolutionary forces and some mainstream Egyptians, the rule of either Shafiq or Mursi is a nightmare scenario. The Brotherhood or Mubarak's man, as a number of activists and political figures have stated, is a tough choice to make because it represents, for them, a choice between the return of an oppressive and corrupt police state or moving towards a rigid theocracy.
Tweet
Pope Shenouda Article