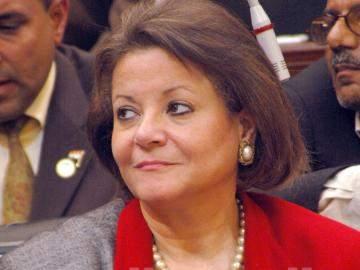 Minister of Planning and International Cooperation Fayza Abouelnaga said that the government has approved the 2012/13 fiscal year budget and its investment plan, prior to sending it to military council head Field Marshal Hussein Tantawi, who would in his turn refer it to Parliament, state television reported Wednesday.

Abouelnaga explained that the budget aims to achieve growth and social justice, reduce unemployment and focus on sectors that create employment opportunities, such as education, human development, health and scientific research.
“As to the investment plan, it amounts to LE55.6 billion,” she said.
“The Health Ministry was allocated LE3 billion, an increase of LE950 million in the first draft, housing LE7.8 billion and scientific research LE1.2 billion, compared with LE496 million last year,” she added.
Finance Minister Momtaz al-Saeed said that state employees' wages reached LE136.6 billion, an increase by LE19.1 billion or 16.3 percent from last year, and that half of the 400,000 workers who are paid from special funds outside the budget were included in it.
He pointed out that the provision for the administration of governmental institutions was reduced from LE30.1 billion to LE28.8 billion, while subsidies for foodstuff was increased from LE18.9 billion to LE26.6 billion, in order to ensure local purchase of wheat at world prices.
Subsidies of petroleum products were reduced and the balance directed to education and health.
Income totaled LE393.4 billion compared to LE349.6 billion, up by LE43.8 billion or 12.5 percent, constituting 22.1 percent of GDP, and covering 73 percent of the total spending.
Public taxes were increased from LE130.8 billion to LE150 billion, representing 38 percent of the general revenues, while sales taxes were increased to LE83.4 billion compared to LE72.1 billion, up LE11.3 billion or 21.2 percent of the total revenues, while custom duties were increased to LE20.8 billion compared to LE18 billion.
Tweet
Pope Shenouda Article