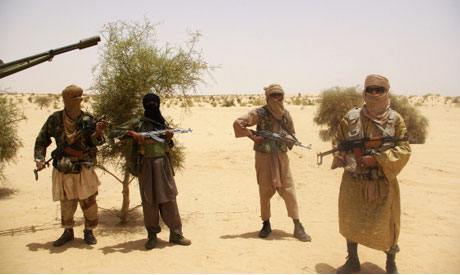 In one town in northern Mali a man has been whipped for drinking alcohol. In another, pictures of unveiled women have been torn down. In a third, traditional music is no longer heard in the streets.

While government soldiers were fighting each other this week for control of the capital in Mali's southwest corner, Islamist fighters were asserting control over the Texas-sized northern half of the country. The Islamists, some of whom are foreigners, are imposing strict religious law, setting up a possible showdown with Tuareg nationalist rebels who say they want a secular state and who seized northern Mali in March alongside the Islamists.
In the fabled city of Timbuktu, whose winding alleyways lined with mud homes fill with sand blown in from the Sahara, pictures of unveiled women have either been torn down or covered over with black paint, according to El Hadj Baba Haidara, a member of the Malian parliament for the city. The Islamists have also cut the signal for national TV broadcasts to the city because they consider the women not properly covered and don't approve of the music the station plays, Haidara said.
"No one came come here and tell us how to practice Islam," Haidara said. "Timbuktu has been Islamic since the 12th century and we have our own way of doing things."
Down the road from one of Timbuktu's mosques, whose wooden doors are decorated with metal crescents and stars, Islamists have made their base at a bank. A sign at the entrance says "Islamic Police" in Arabic and French. Residents have been given a phone number to report serious crimes and other emergencies, but widescale patrols haven't been deployed to enforce Shariah, at least not yet.
But punishments are being meted out.
On Monday in Gao, one of the three biggest cities in north Mali, two men caught smoking hashish were given 30 lashes in front of the police station, according to Hama Dada Toure, a teacher in Gao. One man who had allegedly beaten his pregnant wife was given 10 lashes and ordered to pay her.
Toure said a flexible tree branch is used in the whippings, the blows delivered with less than full force. The Islamists make the person being punished say "Allahu Akbar. La illah illa-Allah" — meaning "God is great. There is no God but God" — each time the branch strikes them.
The last to be punished that day in Gao were two men who had been fighting. One man had been cut in the fight and the other was told that when the injured man recovered he would be able to inflict the exact same cut on his enemy.
In Kidal, another of the three main cities in Mali's north, residents say that the Islamists have banned traditional Tuareg festivities where drums are played all afternoon and into the night.
"Tuareg culture is done for here," mourned Jean Pierre Tita, a resident of the town. "It's Islamic culture that is going to take over now."
Tita said the Islamists have been preaching on the streets, as well as in mosques and at funerals.
In a region where residents generally practice a moderate form of Islam, many are having trouble adapting to the new rules.
"We're not used to them," said one resident of Gao who asked for anonymity for fear of reprisals. He said many young women have been staying at home since the Islamists started patrolling the streets on the lookout for those who are not in line with Shariah precepts.
"Many young girls are scared of the Islamists and they are not used to going out totally covered up. They don't even have the right clothes to cover themselves properly so they prefer to say at home," the resident said. "Most people are against the new rules but some young men who were already very religious are happy with the imposition of Shariah. Some have even joined the Islamists."
In all three cities, the Islamists have attacked businesses selling alcohol, smashing bottles of beer and spirits. Residents say it's no longer possible to buy alcoholic beverages.
One of the groups that is imposing strict Islamic law, Ansar Dine — Arabic for Supporters of Islam — was formed at the end of last year and joined the Tuareg rebel group in chasing government forces out of the north a month ago. The Tuareg rebels declared independence for north Mali, but Ansar Dine (pronounced AN-sar deen) now says that it is against north Mali becoming independent.
Western diplomats in Bamako, the capital, say Ansar Dine has links with an even more hard-line militant Islamic group, Al-Qaida in the Islamic Maghreb, which has kidnapped Europeans and attacked government forces in Mali and beyond. Senior leaders from AQIM have been seen openly in towns in north Mali since Ansar Dine gained some control of them. Diplomats say that fighters sometimes move between the two groups.
Islamist fighters from other countries have been descending on northern Mali in the chaotic aftermath of the military coup in the capital in March that deposed the president. The vast area has become a potential haven for terrorists in a part of the Sahara bristling with heavy weapons looted from Libya. Witnesses in northern Mali and those who have fled to neighboring Niger say they have seen fighters from Algeria, Mauritania and Nigeria.
Another group that is less well known than AQIM, and may be a spinoff from that group, is the Movement for Oneness and Jihad in West Africa, which has also been bringing Shariah to north Mali.
The Tuareg rebel group, which is called the National Movement for the Liberation of the Azawad, or NMLA, wants the foreign fighters gone.
"We've asked the armed groups who are not from here to leave," said Albachar Ag Hamadou, a member of the NMLA. "As for other armed fighters, soon we will tell them to put down their arms and submit themselves to our authority."
It is unclear whether the Tuareg nationalists have the firepower to make the Islamists submit to that authority if they don't do so willingly.
Tweet
Pope Shenouda Article