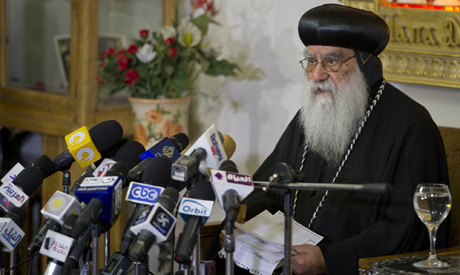 Maged Riyad, legal consultant to the Coptic Orthodox Church in United States, announced in a press conference in Cairo on Sunday that 14 bishops and priests nominated themselves for the papal chair.

Elections for the new pope are expected to take place in September. Riyad stated that Christian Copts outside Egypt will have a strong influence in choosing the new pope, especially the widespread churches in the US, Canada and Europe.
Although the acting Pope Bakhomious received many endorsements, Riyad iterated that "Bishop Bakhomious refused to run in the elections...He does wish to lead the transitional phase and wishes to hand over the church to God's choice." Regardless of the endorsements, the nominee can decline to run.
On the regulations over the papal elections, Riyad said that years before the late Pope Shenouda III's death, he was presented with amendments to the 1957 bylaws. Shenouda did not agree to apply the amendments, however, because he foresaw that they might favour one person.
However, Riyad countered: "I am not satisfied with the 1957 bylaws, since they have many problems and loopholes."
The legal advisor admits that the bylaws cannot be amended right now, though, "since, like a law, it requires many procedures and discussions in the People's Assembly [lower house of parliament] before it can be approved."
According to Riyad, however, the acting Pope Bakhomious is adamant that the bylaws should be amended by the new pope within the first year of taking the seat. In fact, Bakhomious will require the nominees sign an agreement to that effect.
On the moment of truth: when a child is blindfolded and will chose from the lots cast with the names of the three shortlisted papal candidates, Riyad highlighted that Bakhomious is in favour of adding a fourth blank paper, as a possible answer that God does not approve of any of the three nominees.
The candidates for the papal chair include the Youth Bishop Anba Moussa; Bishop Beshoy Secretary of Holy Synod; Bishop Youaness Secretary of the late Pope; General Bishop Raphael; Bishop of Minya governerate Makarios; Germany's Bishop Domyan; Priest Shenouda and others.
Papal nominations opened on 27 April and will close on 17 May. The date elections will start will be announced tomorrow.
Earlier on Saturday, the Assiut governorate Bishop Abram said that - up until then - seven had been nominated to succeed the late Pope Shenouda III.
On the same day Pope Shenouda III passed away, 17 March, 2012, the General Assembly (made up of the Holy Synod and Laity Council) announced that they will narrow down the list to three candidates from a pool of several nominees; one of whom will succeed the pope who died at 88.
That's when a child will be blindfolded and will chose from among the three (now possibly four) cards with the names of the candidates.
According to Ekram Lamei, the media adviser of the Egyptian Evangelical Church, this final step is designed to allow "the will of God," to ultimately make the decision.
Tweet
Pope Shenouda Article