Martyrdom and the Coptic Church 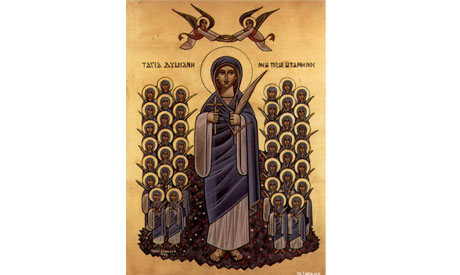 The first recorded martyrdom of a churchman was of a priest named Stephanos from Upper Egypt, whose death caused a painful setback for the church, and led to the dispersal of its members. However, the dispersal led Christian preachers to travel to distant places and spread their faith.

Then there is the martyrdom of the Apostle James, the son of Zebedee, who was murdered by the sword upon orders of King Herod in 44 AD. By that time, the early Christians were coming to the realisation that martyrdom was not an exceptional occurrence, but an inevitable part of their faith. This realisation remains central to the teachings of the Church today, for Christians know that unless they are willing to follow in the footsteps of their saviour, their faith is incomplete. It is this strength of faith that has allowed Christianity to survive in Egypt despite a long history of tribulations.
In The Future of Culture in Egypt, Taha Hussein said that the Coptic Church was a mark of Egypt’s ancient glory and its survival was a testimony to the moral integrity of its followers.
Many churches were built on sites associated with martyrdom. For example, Saint Jerome (b. 342 AD) used to refer to the Church as the Martyrs’ Complex, or Conciliabula Martyrum.
According to Father Athanasius Fahmi George, the word “martyr” is derived from the Greek work “martus” which denotes the act of giving testimony. To understand the connection, one has only to refer to this verse: “But you will receive power when the Holy Spirit comes to you, and you will be my witnesses in Jerusalem and in all Judea and Samaria and to the ends of the earth.” Acts (8:1)
During the early Christian era, the word “martyr” was used to refer to the twelve apostles, who were witnesses to the life of Jesus.
As for the word “confessor,” it corresponds to the word “mologetese” in Greek, which signifies acts of giving testimony that do not lead to violence. The church regards the confessors as “living martyrs”. As the martyr Kyprianos and the scholar Tertullian said, the word “martyr” applies to all confessors, whether they suffer martyrdom or not, because of the implicit danger of self-sacrifice concomitant with the declaration of faith in times of persecution.
Martyrdom was, in fact, one of the reasons Christianity spread so widely. When non-Christians recognised the courage with which those who followed Jesus Christ faced death, many converted to the new religion in the spirit of resistance to the authorities and in solidarity with the victims.
The sign of the cross, adopted by Christians to symbolise the sacrifice of the saviour, eventually became a point of pride for the followers of the Church. Parents tattooed it on the wrists of their infants, so that even if they were martyred, the child would know the cause for which they died.
One of the earliest instances of persecution against Christians took place in Yemen. The Quran preserves memory of this persecution in the Surat Al-Buruj, when it tells the story of “the people of the ditch” (ashab al-okhdud), who were burned alive by the Jewish rulers of Yemen. According to Mar Ignatius Jacob III, the persecution in Yemen lasted for nearly 250 years, from the time of Nero in 64 till the emancipation of the Christians by Emperor Constantine in 313.
In the case of the Coptic Church, another wave of prosecution – prompted by theological differences – ensued under Byzantine rule and lasted till the Arabs conquered Egypt in 641. There were later waves of persecution and religious intolerance during the Umayyad, Abbasid, Fatimid, and Mamluk eras.
Christian theologians have discussed at length the significance of martyrdom and its relevance to the faith. Their arguments draw on Biblical statements concerning the temporary nature of this life and the eternalness of what comes after death. The most quotes verses are:
“The world and its desires pass away, but the man who does the will of God lives forever.” John I (2:17)
“But God commends His love towards us in that while we were yet sinners, Christ died for us.” Romans (5:8)
“The man who loves his life will lose it, while the man who hates his life in this world will keep it for eternal life.” John (12:25)
According to church historians, Christian martyrs didn’t only sacrifice their lives to hold on to their faith. There are instances, mentioned by Eusebius of Caesarea (d. 339) that young Christians, both male and female, opted for death rather than engage in what they believed were sinful sexual acts. Other martyrs, including Saint Athanasius, died because they defended the finer points of the faith against heretical creeds. Others died because they refused to perjure themselves or act dishonestly. Their martyrdom was in obedience of the Biblical injunction noted in the following verse:
“Do not be afraid of what you are about to suffer. I tell you, the devil will put some of you in prison to test you, and you will suffer persecution for ten days. Be faithful even to the point of death and I will give you life as your victor’s crown.” Revelation (2:10)
Other Copts died while defending the country against occupiers. As Pope Shenouda III said, anyone who dies for a just cause, whether spiritual or social or military, dies a martyr.
The Church teaches its followers to accept pain, even death, with joy if it is for a just cause. During the times of persecution, clergymen advised the faithful to steel themselves and be prepared to sacrifice for their faith, just as Jesus did.
In churches, scenes of martyrdom from the Old Testament were depicted in murals, paintings, and engravings to remind the faithful that suffering is a small price to pay for an afterlife of devotion. The saints’ days, celebrated by all Christians, are in fact a celebration not of their death but of their birth. This is why the festivals marking saints’ days are called "mouled" or birthday in Arabic.
Since the days of Pope Kyrillos I, the Coptic Church has initiated a tradition of reading the names of martyrs and saints in mass. The names of the martyrs are read out after the names of the apostles and before the names of the saints.
Tweet
Pope Shenouda Article