Ekram Lamie to FJP delegation: you want to control everything! 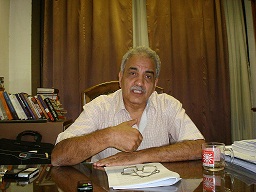 Dr. Rev. Ekram Lamie, Chairman of the Board of Media at the Evangelical Church criticized the delegation of Freedom and Justice Party (FJP) in Minya during a conference entitled "Establishing the values of dialogue and co-existence in the University".

Akram told Copts United that he had an argument with FJP leaders in Minya headed by Dr. Diaa al-Moghazy when he criticized FJP leaders and Muslim Brotherhood group (MB). He said they rushed to control everything, and forgot about their promises that they won’t return to Tahrir square as they’re well represented in the parliament, as well as they try to control the Committee to draft the new constitution.
MB leaders agreed with Ekram in the beginning but they gave excuses that it’s the fault of press and media as they overreact to their mistakes.
Tweet
Pope Shenouda Article