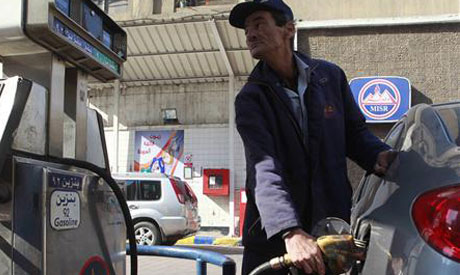 Egypt’s second fuel crisis of 2012 is rumbling on with motorists queuing to fill their tanks as officials give varied explanations for the latest supply shortages.

Bad weather, panic-buying, profiteering and a lack of trust in the government have all been blamed for the crisis, which began 10 days ago and has seen Egyptians struggle to find sufficient fuel for their vehicles.
As cars line the forecourts of Egypt's petrol stations, there is little consensus on what has ultimately brought them there.
Hossam Arafat, head of the General Division of Petroleum Products at the Federation of Chambers of Commerce, said the root of the problem lies in Egypt's diesel supplies.
Diesel imports were frozen between 29 February and 4 March due to adverse weather conditions which briefly closed the region's ports, he told Ahram Online.
"This affected a quarter of Egypt's consumption needs which come from other North African countries and Europe," he explained.
Arafat denied there was a shortage in supply of any kind of petrol -- whether Octane 80, 90, 92 or the more expensive 95.
But he said that the sight of long queues in front at petrol stations were feeding consumers anxiety about the possibility of petrol supplies drying up and had given rise to a wave of panic-buying.
The general manager of Co-operation Petroleum Company, Medhat Youssef denied that distributors are causing a shortage, and even said his company’s stations have the ability to meet all motorists’ demands.
Youssef said his firm had received fuel for the previous six months and its depots stillo hold significant volumes in reserve.
"I am sure these troubles are completely artificial," he told Ahram Online.
Speaking in front of Egypt's newly-elected politicians on Tuesday, Abdulla Ghorab the minister of oil denied there was a problem at the source, saying current shortages were being caused by distributors.
"The consumers don't trust the government and this is the problem," Ghorab told state-run radio on Thursday afternoon, saying he would make more petrol available to the market.
Egypt’s annual petrol production stood at 54 million tonnes in 2011, while annual consumption nationwide reached 53 million tonnes for the same period, state data shows.
A litre of Octane 80 is currently priced at LE0.9 ($0.15). Octane 90 sells for LE1.75 ($0.29), Octane 92 for LE1.85 ($0.3) and the highest quality, Octane 95, for LE2.75 ($0.45).
Tweet
Pope Shenouda Article