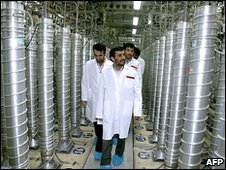 Iran's government has approved plans to build 10 new uranium enrichment plants, according to state TV.
The government told the Iranian nuclear agency to begin work on five sites, with five more to be located over the next two months, the report said.

It comes days after the UN nuclear watchdog rebuked Iran for covering up a uranium enrichment plant.
Western powers say Iran is trying to develop nuclear arms. Iran says its nuclear programme is peaceful.
BBC Tehran correspondent Jon Leyne says Sunday's announcement is a massive act of defiance likely to bring forward direct confrontation over Iran's nuclear programme.
On Friday, the International Atomic Energy Agency (IAEA) passed a resolution that was heavily critical of Iran for covering up a uranium enrichment plant near the town of Qom.
Earlier on Sunday it was reported that the Iranian parliament had urged President Mahmoud Ahmadinejad's government to reduce co-operation with the IAEA.
Tweet
Pope Shenouda Article