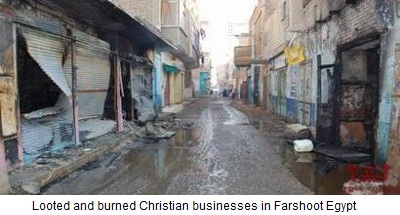 Cairo (AINA) -- In an effort to cover up the Muslim mob violence against the Copts which broke out last week in the town of Farshoot and neighboring villages (AINA 11-22-2009, 11-23-2009), and in view of the complete news blackout imposed by the Egyptian government, Egyptian State Security has intensified its pressure on the Coptic Church in Nag Hammadi and the victims of the violence into accepting extrajudicial reconciliation with the perpetrators, and opening their businesses without any compensation. Similar State Security scenarios have been experienced by Copts in all sectarian incidents in the past, in which they always come out as losers, having been forced to give up civil and criminal charges, while the criminals get away scot-free.

"There will be no reconciliation before full financial compensation has been paid to the Coptic victims, and the criminals are brought to justice, so that safety and security can be restored to the district," said Bishop Kirollos of the Nag Hammadi Diocese.
Free Copts reported that Bishop Kirollos has sent his grievance to President Mubarak, the Prime Minister , the People's Assembly and the Shura Council, asking for speedy financial compensation to the Coptic victims.
In solidarity with the affected businessmen, the remaining Farshoot Coptic merchants have closed their shops in protest.
It has been reported that orders were given to the police in Farshoot by Qena State Security not to issue police reports to the victims; instead, they have to travel 60 KM away to make their reports with the Attorney General in Qena. The authorities have not yet carried out estimates of the losses in spite of several demands made by the Church.
It is estimated that 10 pharmacies and 55 shops and businesses in Farshoot, Abu Shousha, Kom Ahmar and el-Aaraky were looted, vandalized and torched, with total losses exceeding 5 million Egyptian Pounds (1 million USD).
State Security has been putting pressure on the Church to convince the victims to open their stores, "despite the fact that they were told that the victims have no money to clean up and decorate their shops after being looted, vandalized and torched by Muslims, nor the money to buy stock," Bishop Kirollos told activist Wagih Yacoub of the Middle East Christian Association (MECA). "Having failed to make me bend to their pressure, State Security has tried putting pressure on the victims, but without success. I told them that no pharmacy or shop will be opened before the rights of my children in the Diocese are fully restored."
Having failed to get results from the Church, State Security has drawn in the help of the area's members of parliament. "They are trying to pacify the people by holding conferences, to make the matter 'go to sleep', so that they would escape paying any compensation to the victims," he commented. "But I am now sending a message to the parliament members: 'If you don't support the Christians, the Christians will boycott the coming elections.' Let them look for someone else to make them win."
People who were forced to attend those conferences said that they were told that having to close down their businesses "does not look good to the outside world, and would harm the reputation of Egypt on the international level."
One other pressure tactic often used successfully by the State Security to enforce its decisions on the Church is taking into custody innocent Copts and using them as "hostages" in what has come to be know as their "Let go and I will let go" policy.
"State Security has taken into custody fours Copts who were victims of the violence, they were told they would be detained until they forfeit their claims and sign a 'reconciliation' note, so as to make it appear as a case of personal differences between individuals," Bishop Kirollos told Free Copts.
A fact-finding commission of rights activists and journalists was refused entry on November 22, 2009 into the affected areas by State Security. "We were escorted to the Farshoot chief detective, Essam Ghanem, who cautioned us not to try to estimate the losses or take photos, and we were asked to leave town, otherwise charges will be brought against us," said activist Rafat Samir. "The pretext they gave us was that we are strangers to the town, and when we asked him who gave such orders, he said it was from a higher authority."
In an interview with Free Copts, Bishop Kirollos said "We gave the authorities the names of two of the perpetrators who are ex-convicts from Farshoot, they arrested then released them. They are the masterminds behind the latest attacks, and their presence presents a danger to us."
Commenting on the deportation of 35 Coptic families from the villages of Kom Ahmar and Ezbet Sherif, he said "State Security told me that they fear for their safety, so I told them why don't you protect them? If they wanted to protect them, they could have easily done that. State Security is mighty. However, after the families left, Muslims looted their homes and completely destroyed two of them."
Many Copts believe that the increase in the deportation of Copts whenever there is a Muslim-Christian incident, is an objective of the government to migrate Copts from Upper Egypt, where they constitute the largest congregations of Christians in Egypt.
The violence that took place in Farshoot and the neighboring villages on November 21, 2009, was prompted by a rumor that the Copt Guirgis Baroumi allegedly sexually abused a 12-year-old Muslim girl. Although the girl's family agreed with the Church to wait for the police investigations, a mob of nearly 3000 Muslims, mainly students from Al-Azhar Institute in Farshoot, incited by their Principal, went on a rampage of looting and burning Coptic-owned properties. "The family of the involved Muslim girl did not join in." Bishop Kirollos told Free Copts.
Coptic Organizations in the Diaspora issued a joint communiqué on November 25, 2009 condemning the attacks on Farshoot and the neighboring villages as well as the role of the State Security for failing to protect the Coptic citizens. The statement appealed to all human rights organizations in the world to join them in condemning the Egyptian government, and in protecting the Christians in Egypt from the war of systematic extermination waged against them, implementing the Wahhabi policy which is "against everything that is non-Muslim."
Tweet
Author