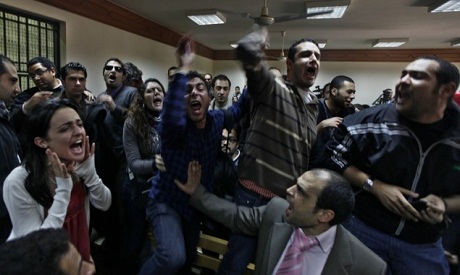 Three judges in charge of handling the recent government case against a number of US and Egyptian non-governmental organisations (NGOs) announced Tuesday afternoon that they have recused themselves "for reasons of discomfort," without giving an explanation.

The 14 Egyptian and 29 foreign aid workers face trial for receiving illegal foreign funding and for working without a formal license. They have been accused of posing a threat to Egypt's national security.
Vetran reform Judge Mahmoud El-Khodeiri, who is currently the head of the People's Assembly's Legislative Committee, explained Tuesday night on private TV channel Al-Hayat that a judge withdrawing from a case for "reasons of discomfort" could be due to an existing relationship the judge has with any of the defendants, accused or lawyers; in other words due to partiality or bias.
When judges do recuse themselves, the lawsuit is transferred to another district court within a "brief" time period, El-Khodeiri concluded.
Investigations into civil society groups receiving foreign funding began mid-2011. The situation escalated when prosecution members and Egypt's security forces raided and temporarily closed as many as 17 NGO offices in Cairo late December. These actions and the ensuing lawsuit have put a strain on Egyptian-US relations.
The televised trial had only reached its first session on Sunday when the judges abruptly decided to recuse themselves.
Of the 29 foreign aid workers facing trial, only one German NGO employee attended. The accused American workers were not present and later said that they had not received any official court summons.
Some local activists have charged that the judges in the case are not impartial, and might be acting based on a political decision by the government to single out NGOs, who have criticised human rights practices in Egypt, for prosecution.
Tweet
Pope Shenouda Article