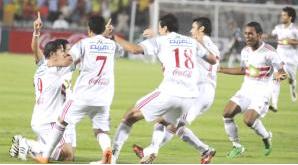 CAIRO - Zamalek and Enppi have advanced to the Egypt Cup final after defeating Harras el-Hodoud and Arab Contractors 2-1, 8-7 (on penalties kicks) respectively in their semi-final games on Saturday.

Zamalek's coach Hassan Shehata expressed his delight at the result that has sent the White Knights through to the final.
"We’ve played well in all of our three Cup games so far, thanks to the changes made and the tactics of the coaching staff," Shehata told reporters, pointing out that sticking to the rules is the main key to success in any organisation.
As for the game against Harras el-Hodoud, the veteran coach admitted that it was tough, as they were up against a good team. "The game was difficult for us, but the changes made in the second-half swung it.”
Two goals from striker Amr Zaki sent Zamalek into the Egypt Cup final with a hard-fought 2-1 victory over holders Harras el-Hodoud. This is the third successive victory for the White Knights under the new coaching staff headed by Shehata.
They overwhelmed Wadi Degla 4-1 in their round of 16 tie, thanks to goals from Egypt’s skipper Ahmed Hassan and striker Ahmed Gaafar, who scored a brace each. Then the team stunned Gouna 3-2.
"Although we missed many chances in the first-half, we did manage to score a goal, which encouraged us to play better in the second-half," Shehata explained.
"The changes made in the second-half were fruitful, allowing us to dominate the game and win.”
Shehata expressed his satisfaction at the players' high level of fitness.
"This showed, especially in the second-half of the game. During the half-time break, I told the players to go out and enjoy the second-half and it worked," added the experienced 64-year-old.
The coaching staff and fans are now desperate to beat Enppi in order to lift the Egypt Cup. Zamalek’s chances after a three-year title drought are looking good, as Al-Ahly were knocked out by Enppi in the round of 16, and Ismaili were knocked out by Arab Contractors.
As for the final against Enppi, the White Knights' coach said that the team still have just over a week to prepare. "The coaching staff will try, over the next few days, to prepare the players well for the final game."
Shehata thanked the team's fans for supporting the team in the last three games. "Really, many thanks to the White Knights fans, and we still need them in the coming game to win the title.”
Zamalek's general coach, Ismail Youssef, was equally delighted, stressing that every game the team play is a must-win one, as the White Knights are a big outfit and the fans don’t accept it if we draw or lose.
"The team played a good game and our players' experience was the key for victory in the second-half,” Youssef stressed. "This victory was a great start to the season with our new players and coaching staff. This is our third game with the team.”
The ex-Gouna coach agreed that Shehata's second-half substitutions and the fitness of the players made all the difference.
Zamalek star Mohamed Abdel-Razeq 'Shikaballah' was just as happy with the result, pointing out that the he expected them to swing it.
"Although Harras el-Hodoud are a good team, I had feeling that we would win the game," the talented player said after the game.
"Hassan Shehata made the players try out different formations in the pre-season training. He knows how to deal with the players, getting the best out of them and putting them at their ease; they calmed down in the second-half and we won," he added.
Mokhtar Mokhtar, Enppi's coach, is also delighted that his team have qualified for the final of the Egypt Cup, stressing that the players’ fitness and experience were what gave the Petroleum outfit the edge.
"Reaching the Egypt Cup final is really an achievement," said Mokhtar after the game, pointing that he is hoping the players can win the title.
Mokhtar added that eight days are enough for the Petroleum team to prepare. "This will give us time to recover, so that we can put on well against Zamalek. Really, the players are exhausted as a result of these dramatic pre-season Cup ties.
Enppi's player Adel Moustafa was equally happy, putting down the team’s strong performance to their resolve and determination.
"We should not forget veteran coach Mokhtar, whose tactics and experience have worked wonders for the team.”
Tweet
Pope Shenouda Article