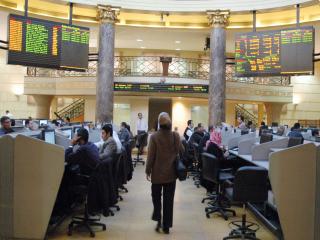 The first quarter balance of payment for the current fiscal year indicates that the Egyptian economy is still suffering from the effects of the global financial crisis.
The Central Bank reported on Tuesday that the trade deficit reached US$7.2 billion due to petroleum exports dropping by 40 per cent and other commodities exports dropping by 27 per cent.
On the other hand, petroleum imports dropped 39 per cent and non-petroleum commodities imports 13 per cent, causing the payment liabilities to go down 17 per cent.
The services balance also dropped by 19 per cent due to a 24 per cent drop in Suez Canal income.
Investments dropped 65 per cent due to a drop in time deposit interests abroad. Income from tourism dropped 1.6 per cent in the first quarter.
Public transfers were up 25 per cent due to an increase in the number of grants given to the Egyptian government, while private transfers went down five per cent.
Finally, the report said Egypt was granted an extra US$1.2 billion in credit facilities, which would re-evaluate the central bank's assets and liabilities abroad.
Tweet
Pope Shenouda Article