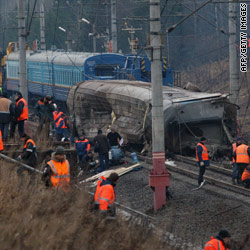 Moscow, Russia (CNN) -- Investigators probing the derailment of an express train in Russia say they have found "elements of an explosive device" at the site.

The derailment killed at least 26 people and injured about 100, but there was no immediate word on who or what group might have been behind the action.

The investigative committee of the Russian prosecutor's office said Saturday police found "a crater with a depth of about 1.5 meters on the railroad bed" and traces of a bomb.

"Criminology experts have come to a preliminary conclusion that there was an explosion of an improvised explosive device equivalent to seven kilos of TNT," Federal Security Service Director Alexander Bortnikov said. He was quoted by Interfax, the Russian news agency.

"Several leads are being pursued now. A criminal case has been opened under Article 205 ("terrorism") and Article 22 ("illegal possession or storage of weapons or explosives") of the Russian Criminal Code."

A total of 681 people -- 20 of them employees -- were on the Nevsky Express as it traveled from Moscow to St. Petersburg on Friday night. The Nevsky Express is Russia's fastest train, equivalent to a bullet train.
The crash happened at 9:25 p.m. (1825 GMT) when the train was 280 kilometers (174 miles) from St. Petersburg, Russian state radio said.
At least three carriages carrying more than 130 people derailed and turned on their sides, and emergency workers were working to free anyone who may still be trapped inside.
The crash happened 44 minutes after another high-speed train, the Sapsan, had successfully traveled from Moscow to St. Petersburg on the same rails, a representative of the Russian Transport Police said during a video conference call Saturday.
In August 2007, an explosion on the tracks derailed the Nevsky Express, injuring 60 people in what authorities called a terrorist act. Some 27,000 passengers on 60 trains were facing delays Saturday as a result of the accident, Russian State TV reported.
CNN's Maxim Tkachenko contributed to this report
Tweet
Pope Shenouda Article