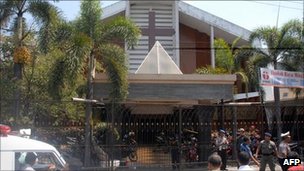 A Protestant church in Indonesia's central Java province has been hit by a suspected suicide attack, say police.

A police spokesman told reporters that only the suspected bomber had died but that at least 15 other people were injured in the blast in Kepunton, Solo.
Indonesia is the world's most populous Muslim country but is officially a secular state.
Radical Islamist groups have carried out a number of deadly attacks in the past few years.
Witnesses said the bomber struck as people were leaving the Bethel Injil Sepuluh church after a Sunday service.
Some witnesses said three other people had been killed, but Lt Col Djihartono told the AFP news agency that only the bomber was confirmed dead.
"We're still investigating if there are other people killed," he said, adding that an anti-terror unit was on the scene collecting evidence.
One witness, Fani, said she had heard the blast as she was leaving the church.
"Everyone was screaming," she told Metro TV. "I saw fiery sparks and, near the entrance, a man dead on the ground... People around him were splattered with blood."
A hospital official, Bambang Sumarsono, said 20 people had been injured, three seriously, the Associated Press news agency reports.
The El Shinta radio station said casualties were taken to two hospitals.
Indonesia's security minister Djoko Suyanto said nothing could justify the "inhuman" attack.
"It is the task of everybody to overcome this act of terrorism," he said.
The identity of the bomber and the motive behind the attack are not yet known.
The Islamist militant group Jemaah Islamiah (JI), which has links to al-Qaeda, has been blamed for a string of attacks in Indonesia, including the 2002 Bali bombings which killed 202 people.
The group has been significantly weakened by the arrest or killing of many of its key leaders, but lone bombers have continued to carry out attacks.
Tweet
Pope Shenouda Article