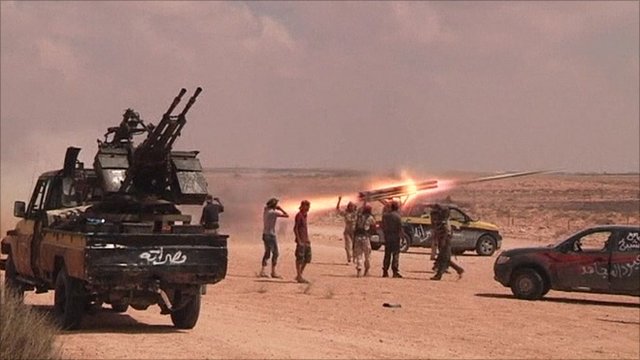 Libya's interim government forces say they have made progress in their attack on Sirte, a stronghold of forces loyal to Col Muammar Gaddafi.

However, the advance has been slow and there is fierce resistance from loyalist forces.
There are also reports of heavy fighting in another Gaddafi stronghold, the town of Bani Walid.
Col Gaddafi has been in hiding since opposition forces captured the capital Tripoli in August.
His remaining forces are holding out in Sirte, Bani Walid and several other towns while forces of the new interim leadership, the National Transitional Council (NTC), try to assert full control over the country.
A spokesman for the military council in the city of Misrata, on the coast between Sirte and Tripoli, said some fighters had advanced to within 7km (4.3 miles) of the centre of Sirte.
Misrata was the scene of a long siege as Col Gaddafi's forces tried to stamp out the uprising against him there. There is a strong contingent of fighters from Misrata among the anti-Gaddafi forces attacking Sirte.
The spokesman said another eight fighters were killed on Saturday, bringing the total to almost 30, with many more injured, reports the BBC's Richard Galpin in Misrata.
There are reports of heavy street fighting, as the anti-Gaddafi forces are met with fierce machine gun, rocket and mortar fire.
The BBC's Alastair Leithead, with the anti-Gaddafi forces near Sirte, describes a process of slow advances as defensive positions are bombarded, worn down and then taken.
Our correspondent says the anti-Gaddafi forces are still some distance from the town's eastern gates, although they appear to be closer on the western and southern approaches.
NTC spokesman Ahmed Bani said its forces had taken control of the airport and a major air base, although one fighter told Agence France-Presse there were still clashes near the airport.
The fighter, Abdul Rauf al-Mansuri, said: "We don't even have 5% of Sirte because we just go in and out."
A teacher fleeing Sirte, Nouri Abu Bakr, told Associated Press conditions there were worsening, with no electricity or medicine and food supplies nearly exhausted.
"Gaddafi gave all the people weapons, but those fighting are the Gaddafi brigade of loyalists," he said.
There are unconfirmed reports that anti-Gaddafi troops have now taken full control of Harawa, 80km east of Sirte, after negotiating a surrender deal.
There were conflicting claims over a Nato bombing in the city. The Misrata military council spokesman told the BBC a Nato aircraft hit a building in the city on Friday, killing a large number of Col Gaddafi's fighters.
Col Gaddafi's spokesman, Moussa Ibrahim, told Reuters news agency that the strike had killed more than 300 civilians.
Neither claim could be verified and Nato said similar reports from Col Gaddafi's side in the past had often been "unfounded or inconclusive".
At Bani Walid, an oasis town about 250km west of Sirte, anti-Gaddafi forces were reported to be renewing their attack late on Saturday after earlier advances had been repelled.
"Gaddafi forces attacked the checkpoint so our troops went in. There is a lot of fighting inside the city right now," Reuters quoted regional NTC official Abdullah Kenshil as saying.
Tweet
Pope Shenouda Article