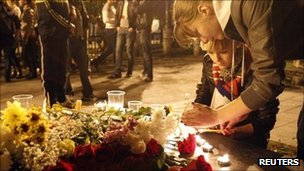 Russia and the world of ice hockey are mourning the deaths of 36 players and officials from the major league team Lokomotiv Yaroslavl in a plane crash.

World ice hockey chief Rene Fasel said the crash in Yaroslavl was "the darkest day in the history of our sport".
The Yak-42 plane came down shortly after take off on Wednesday from the Russian city and burst into flames.
In all, 43 people - including top Russian and European players - died in the accident. Only two people survived.
All 11 foreign players and coaches on board the plane were killed, including the team's Canadian coach, Brad McCrimmon, Swedish goalie Stefan Liv and players from Belarus, the Czech Republic, Germany, Latvia, Slovakia and Ukraine.
Russian player Alexander Galimov survived the crash with 80% burns along with a member of the crew. Local media briefly reported the player had died of his injuries, but a doctor at the local hospital later said he was still alive after undergoing surgery.
The second survivor was identified as Alexander Sizov, member of the eight-strong crew.
Search and rescue teams have now recovered 35 bodies, and 12 of the victims have been identified.
The cause of the crash is being investigated, but reports in the Russian media suggest the plane may have struck a radio mast.
'Black day'
"Deepest condolences to the loved ones of the Yaroslavl air crash victims, and to all Lokomotiv Yaroslavl fans," Russian President Dmitry Medvedev wrote on Twitter.
Mr Medvedev - who had been due to due to address a forum in Yaroslavl on Thursday - said he would alter his schedule to visit the crash site at the city's Tunoshna airport.
Mr Fasel, president of the International Ice Hockey Federation (IIHF), said: "This is not only a Russian tragedy - the Lokomotiv roster included players and coaches from 10 nations."
Lokomotiv is one of the most successful clubs in the Kontinental Hockey League (KHL), and the organisation's chairman, Vyacheslav Fetisov, described the air disaster as an "irreparable loss for world ice hockey".
Fans in Trencin, western Slovakia, lit candles for their star player Pavol Demitra, while Czechs paid similar respects in the Old Town Square in Prague to honour their three compatriots killed in the crash: Josef Vasicek, Karel Rachunek and Jan Marek.
Gary Bettman, the commissioner of the North American National Hockey League (NHL), where a number of those who died had long careers, said: "Though it occurred thousands of miles away from our home arenas, this tragedy represents a catastrophic loss to the hockey world - including the NHL family, which lost so many fathers, sons, teammates and friends."
In Yaroslavl, thousands of fans wearing replica jerseys gathered outside Lokomotiv's stadium in Yaroslavl on Wednesday evening, paying their respects and singing team songs.
The reigning champions Ufa had already started their first game of the KHL season, but abandoned the match when the gravity of the crash became clear.
The 10,000-strong crowd in Ufa's stadium held a minute's silence for the victims of the crash.
On Twitter, Russians exchanged messages about a "black day" for ice hockey.
Correspondents say the ice hockey world is already reeling from a series of tragedies, with three NHL players dying in separate incidents in the last four months.
'Wobbling in flight'
The aircraft, which was heading to Belarus for the season's first match, crashed at 1605 local time (1305 GMT) on Wednesday.
The jet then burst into flames, with some of the wreckage and bodies falling in the nearby River Tunoshna, a tributary of the Volga.
A local policeman told the BBC Russian service he had seen the plane come down.
He said the plane had barely taken off before it plunged to the ground, and he saw "flames as high as a nine-storey building".
Local resident Irina Prakhova saw the plane going down, then heard a loud bang and saw a plume of smoke, the Associated Press news agency reported.
"It was wobbling in flight, it was clear that something was wrong," she said. "I saw them pulling bodies to the shore, some still in their seats with seatbelts on."
Russian aviation officials were quoted as saying the Yak-42 jet had failed to gain height and hit a radio mast, breaking up and catching fire.
The plane was operated by the Yak-Service company, Russia's aviation authorities said.
They said the jet entered service in 1993 and had a certificate of airworthiness valid until 1 October 2011.
President Medvedev has promised to overhaul the industry and take out of service ageing jets from the Soviet era.
The country has a poor aviation safety record. In July this year a passenger plane crashed in northern Russia and 44 people died.
Tweet
Pope Shenouda Article