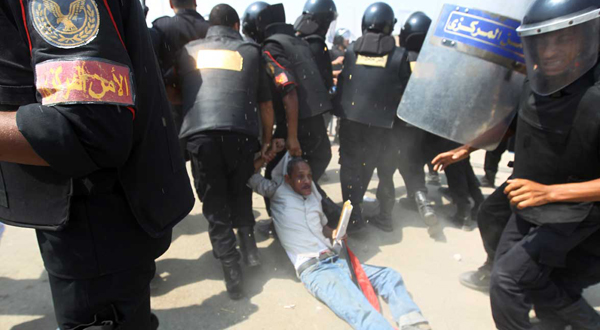 CAIRO: The prosecution released on Tuesday 21 anti-Mubarak protesters arrested after clashes with the police and supporters of the ex-president outside the court where the third trial hearing was held on Monday.

They were released on LE 200 bail.
The protesters were mainly supporters of the families of martyrs and the injured as well as passersby who were randomly arrested near the Police Academy where the trial is held.
They were accused of committing violent acts to terrorize citizens and attacking in public servants on duty (a reference to police officers) injuring a lieutenant colonel, a captain, one low-ranking officer and 11 central security police.
"Dentist Amr Ahmed Moussa, is a member of the April 6 Movement and was arrested while rescuing another detainee Mohamed Abdel Meguid, 19, who was beaten on the head and transferred to hospital," lawyer at the Hisham Mubarak Law Center Malek Adly told Daily News Egypt.
"Both Abdel-Meguid and Moussa were interrogated as defendants and victims at the same time due to their bad injuries. Abdel-Meguid had to be transferred to the prosecution in an ambulance because his condition did not allow him to be transferred by police," Adly said.
He confirmed that four other protesters were injured, adding that lawyers will file a complaint to the Prosecutor General against the violations committed.
"Moussa was heavily beaten by police forces and his shoulder was dislocated while attempting to rescue one of the protesters who was badly injured," the April 6 Movement said Monday in a joint statement released by different political movements condemning the arrests.
"This incident is one of a series of arrests against revolutionaries and the deliberate revenge against them by police officers. It is a dangerous sign of the continuation of thuggery practiced by the security during Mubarak's era," the statement added.
The El-Tahrir Doctors Organization condemned the arrest of protesters who were denied access to medical care after being badly beaten by Mubarak supporters and security forces.
Its spokesperson, Mohamed Fattouh, said the organization filed a complaint to the Minister to Health regarding this issue.
Tweet
Pope Shenouda Article