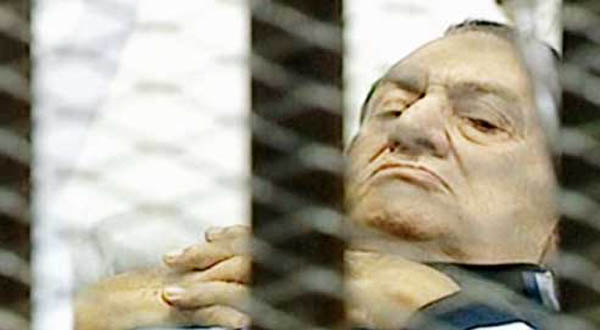 CAIRO: The testimonies of prosecution witnesses made on Monday during the third trial hearing of ousted President Hosni Mubarak contradicted their previous statements to the prosecution, lawyers said on Tuesday.

"Either they were paid or ordered by these officials to change their testimonies," civil rights lawyer volunteering for the prosecution, Samir Helmy, told Daily News Egypt.
He added that he sensed that the testimonies were carefully choreographed and recited because they contradicted the truth.
"They were simply reciting what they were told to say," he claimed.
However, human rights lawyer Ahmed Seif El-Islam told DNE during the trial on Tuesday that he was impressed with the performance of the judge and the first witness General Hussein Said.
“Everything the witness said corresponds with the prosecution’s investigations."
Other civil rights lawyers in addition to defense lawyer Ihab Ramzy, representing security chief Osama El-Marasy, agreed that the testimonies were different.
They believed that the testimonies aimed to scapegoat Ahmed Ramzy, the former deputy interior minister who headed the central security agency during the January uprising that toppled the regime.
Ramzy is among six top security aides tried alongside former minister of interior Habib El-Adly on charges of ordering the killing of protesters.
The judge summoned four witnesses: General Hussein Said as well as police officials Emad Badry, Bassem Hassan and Mahmoud Galal Abdel Hamid.
According to the lawyers, the prosecution witnesses failed to prove the charges against the defendants.
"The witnesses completely denied that any of the defendants gave the orders to shoot peaceful protesters," Ihab Ramzy told Daily News Egypt.
They merely said that unilateral orders were given by Ahmed Ramzy to deploy firearms to the interior ministry to protect it from being raided by protesters on Jan 28.
However, they fell short of admitting that firearms were used by security forces against peaceful protesters or that any such orders were given by any of the defendants.
The first witness Said, former head of a wireless communication unit of the central security agency, said that Ramzy ordered officials posted in Tahrir Square to use tear gas, water cannons and metal pellets to disperse protesters in an operation which lasted between two to three hours at midnight on Jan. 25.
On Jan. 28, Ramzy's main instruction was to prevent protesters from reaching Tahrir Square, ordering security forces to deal with protesters according to “what they deemed appropriate.
The second witness, Badry said that they were ordered to exercise restraint and treat the protesters like "their brothers" or "sons", according to the Middle East News Agency (MENA).
He added that security forces weren't allowed to use metal pellets or firearms against the peaceful protesters.
The third witness, Hassan, confirmed the second witnesses’ testimony, adding that security forces were allowed to fire metal pellets in the air or at protesters’ legs in extreme cases if they attempt to break into the ministry.
The lawyers argued that the witnesses gave completely different testimonies to the prosecution, admitting back then that they were ordered by El-Adly to fire live bullets at protesters.
Civil rights lawyer Ibrahim Bassiouny said that these witnesses should be charged with perjury. Ihab Ramzy agreed, stating that only the court had the authority to charge them with perjury or accept their testimonies as part of the evidence.
On his part, Helmy maintained that he will call on the court to charge them with perjury in his closing argument.
But possible contradictions in witness testimonies were not the only points of contention during the Monday hearing.
The first witness, Said, was sentenced to two years in prison for destroying a CD that included communications between the defendants during the 18-day uprising earlier this year. Said is appealing the sentence.
Bassiouny believed that the court should disregard his testimony because he lacked credibility and was convicted in a related case, but Ihab Ramzy maintained that the final decision was up to the court, according to the law.
"The court didn't know before yesterday's session that he was convicted," Bassiouny reasoned.
"Now that the court knows, it should disregard his testimony," he added.
Civil society lawyers complained that they weren't given enough opportunity to question the witnesses during the 10-hour trial, as each lawyer was given the opportunity to ask only one question.
The court will continue listening to the testimonies of five new witnesses in the hearing on Wednesday.
Mubarak is the first Arab leader to stand trial in person since popular uprisings swept the Middle East earlier this year.
Tweet
Pope Shenouda Article