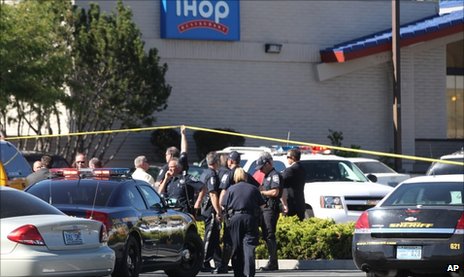 Six others were wounded in the attack at the International House of Pancakes chain at 09:00 (16:00 GMT).
Three of the four people killed were National Guardsmen in uniform, with several other Guards injured.
The suspect, named by police as Eduardo Sencion, 32, then shot himself and died later at a hospital in Reno.
Carson City Sheriff Kenny Furlong said Sencion had no known connection to the military and no known reason to attack the National Guard.
'Petrified'
Nevertheless, police said that once he entered the restaurant he took aim and shot every National Guard member in uniform.
Special Agent Patrick Turner, spokesman for the FBI Nevada office in Las Vegas, said that seven people had been wounded. One of the wounded later died of her injuries in hospital.
The police and FBI descended on the restaurant in South Carson Street, also known as US 395, the city's main route.
Witnesses said a man with a rifle pulled up outside the IHOP, shot at a man on a motorcycle and then walked inside the restaurant.
A local restaurant owner told the Associated Press he tried to shoot the attacker with his own weapon, but he entered the pancake restaurant before he had a chance to take aim.
"But when he came at me, when somebody is pointing an automatic weapon at you - you can't believe the firepower, the kind of rounds coming out of that weapon," said Ralph Swagler, who owns Locals BBQ & Grill.
The owner of a nearby diner told the Reno-Journal Gazette that the man had left after several minutes and continued firing in the nearby shopping centre.
Gigi Lee Tzow, an insurance agent, told the Las Vegas Review-Journal newspaper that she heard the shooting and saw a young man who may have been an IHOP employee run for cover.
"It sounded like a machine-gun," she said. "It was going off for a long time.
"Then there was a second round of firing, and then stopped.
"A kid ran up and hid behind the pillar in front of my store. He seemed petrified. I called 911 and locked my door."
The pancake restaurant is located some four miles (7km) from a National Guard base, according to to reports.
One Nevada National Guardsman expressed shock and sadness at the shooting.
"It's hard to believe something like this would happen to really good people," Specialist Lee Amato, 33 told AP.
"It's mind-boggling and hard to comprehend."
Tweet
Pope Shenouda Article