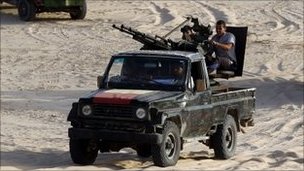 Col Muammar Gaddafi's security chief is among several former Libyan officials who have arrived in the capital of Niger, Niamey, officials there say.

They say the man, Mansour Daw, entered the country on Sunday and travelled via the desert city of Agadez.
Meanwhile, a convoy said to be carrying dozens of heavily armed Gaddafi loyalists as well as gold and cash, has also crossed the border.
Niger officials say Col Gaddafi is not believed to be travelling with it.
A senior rebel military commander said that he believed Col Gaddafi was still in Libya, but heading away from areas which have seen fighting.
"We have it from many sources that he's trying to go further south, towards Chad or Niger," Hisham Buhagiar said in an interview with Reuters news agency.
The former Libyan leader has vowed to fight to the death, even though he has lost control of most of the country.
Tuareg ties
Niger officials said Mr Daw, who headed Col Gaddafi's personal security brigades, crossed into Niger on Sunday.
Reuters news agency quoted an unnamed US security as saying he arrived with other prominent former officials.
Niger Interior Minister Abdou Labo told reporters on Tuesday that Mr Daw had been allowed to enter the country on humanitarian grounds.
The latest convoy to reach Niger from Libya arrived in Agadez on Monday, and is said to be headed for Niamey, 950km (600 miles) to the south-west.
It is believed to consist of at least 50 heavily armed vehicles, and to include Tuareg fighters recruited by Col Gaddafi.
"Vehicles carrying gold, euros and dollars crossed from Jufra into Niger with the help of Tuaregs from the Niger tribe," Fathi Baja from Libya's National Transitional Council (NTC) told Reuters.
The US called on Niger to arrest senior pro-Gaddafi figures entering the country. "We have strongly urged the Nigeran officials to detain those members of the regime who may be subject to prosecution," said state department spokeswoman Victoria Nuland.
Earlier reports that Burkina Faso - which borders Niger to the south-west - had offered to welcome Col Gaddafi have been denied by the country's communication minister.
Alain Edouard Traore told the BBC: "Burkina Faso has not offered asylum to Mr Gaddafi. Burkina Faso is not informed of Mr Gaddafi coming to this country."
The NTC spokesman in London, Guma el-Gamaty, told the BBC that Niger would be penalised if it was proven to have helped Col Gaddafi escape.
"Niger is a neighbour of Libya from the south and should be considering the future relationship with Libya," said Mr Gamaty. "This - if confirmed - will very much antagonise any future relationship between Libya and Niger."
Col Gaddafi's wife, two of his sons and his daughter have already fled to Algeria.
Negotiating surrender
An NTC delegation on Tuesday held fresh talks with tribal elders in the town of Bani Walid - 150km (95 miles) south-east of Tripoli.
Bani Walid is one of four towns and cities still controlled by Gaddafi supporters. The others are Jufra, Sabha and Col Gaddafi's birthplace of Sirte.
The NTC, which has positioned forces outside Bani Walid, has been trying to negotiate a peaceful surrender.
After the talks chief NTC negotiator Abdullah Kenshil told AFP the elders had been "reassured that we do not mean them harm and we will preserve their lives".
The senior negotiator for the elders told the BBC that they had returned to Bani Walid to convince residents and pro-Gaddafi troops to let them enter the town. He said he was confident of a peaceful end to the stand-off.
NTC leader Mustafa Abdul Jalil has said the talks would continue until a deadline on Saturday.
As well as being a Gaddafi stronghold, Bani Walid is also the home of the biggest and most powerful Libyan tribe, the Warfalla.
Tweet
Pope Shenouda Article