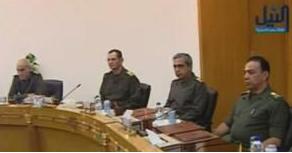 CAIRO - Egypt's military, in charge since an 18-day popular revolt ousted President Hosni Mubarak on Feb. 11, says it wants to hand power to civilians as soon as possible and has set a timeline for a parliamentary election to start the process.

No one doubts the army will ensure a free and fair vote, nor do most question that it wants to quit day-to-day government.
But many protesters believe the army, with its vast business interests and which provided Egypt's rulers for six decades, will seek to keep a hand on the levers of power. This has fuelled tension on the streets and sometimes clashes.
Coupled with that are tensions between groups who initially galvanised protests against Mubarak by putting nationalism above religion and the Islamists like the Muslim Brotherhood who have shown they can also mass supporters on the street.
Here are some of the main political risks ahead:
The Supreme Council of the Armed Forces, which took control when Mubarak was driven out, has seemed eager to transfer government back to civilians.
It has set a timeline for a parliamentary election, with voting expected in November, followed by a presidential election possibly early next year. After a new parliament is elected the process of drawing up a new constitution starts.
The army was the only pillar of the establishment to survive intact after Mubarak's party collapsed. It controls a big chunk of the economy, between 10 and 30 percent according to some analysts. In future, it may seek a role as guardian of national security, which could provide a broad remit to intervene.
That could lead to tension with protesters and, in the longer term, civilian governments as it has in Turkey, whose military ousted four governments since 1960 although the power of Turkish generals has now been reined in.
Tweet
Pope Shenouda Article