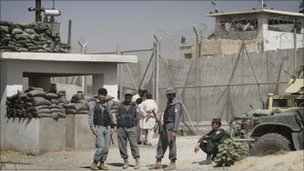 The Nato-led mission in Afghanistan is considering suspending the transfer of detainees to several Afghan jails, following allegations of widespread torture, the BBC has learned.

The accusations came in an as-yet unpublished UN report, which describes how prisoners were beaten and in some cases given electric shocks.
It accuses some police commanders of running secret jails.
The jails are run by the Afghan police and intelligence service.
The international mission has met with National Directorate of Security (NDS) chiefs and warned them that it may stop transferring prisoners in seven provinces including Khost in the south-east, Takhar in the north and Herat in the West.
In Uruzgan and Kunduz provinces, transfers of prisoners to the police may be stopped because of similar worries of mistreatment.
The transfer of prisoners in restive Kandahar province has already ended.
One official from the International Stabilisation and Assistance Force (Isaf) described this as a major setback.
The Nato-led mission plans to bring foreign troops home, by handing more responsibility to Afghans. There are concerns that in some areas, Afghan security forces cannot be trusted.
Last year, Britain's Ministry of Defence (MOD) agreed to halt the transfer of prisoners to NDS jails in Kabul, after a court ruled that they faced the risk of torture or serious mistreatment.
Prisoners are still transferred in the southern province of Helmand, but under strict supervision, according to the MOD.
Tweet
Pope Shenouda Article