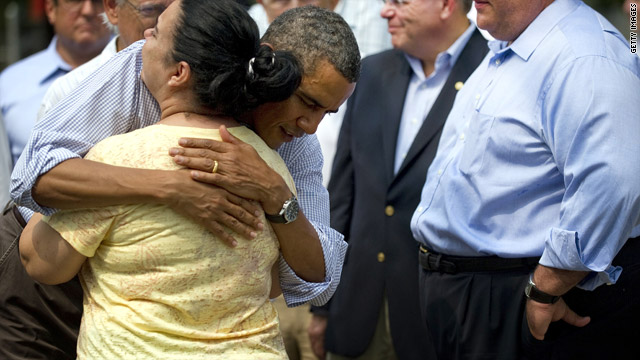 Obama visited the towns of Paterson and Wayne, where residents showed the high-water marks from the flooding spawned by last week's hurricane. The Passaic River and one of its tributaries, the Pompton, overflowed their banks through the area after Irene dumped heavy rains across the Northeast.
"I know it's a tough time right now," Obama told people whose homes had flooded in Wayne, on the banks of the Pompton. "You guys hang in there. We're going to do everything we can to help."
Irene inflicted at least $1 billion in wind damage alone from North Carolina to New England, according to federal government estimates. Private-sector analysts have put the total expected losses as high as $6 billion.
Get the latest news on Tropical Storm Lee
The federal government's tab for the storm could exhaust the $800 million left in the Federal Emergency Management Agency's disaster relief fund before the fiscal year ends September 30. Some conservative House Republicans, led by Rep. Eric Cantor, R-Virginia, have called for spending cuts to offset any increase in emergency funds.
But Obama told reporters Sunday that he would not let "Washington politics" affect recovery efforts.
"We're going to make sure resources are here," he said.
Irene dumped torrential rain across the Eastern Seaboard from Florida to Vermont, where more flooding cut off small towns in the New England hills. A total of 43 people died in the storm, which hit North Carolina's Outer Banks as a hurricane with 85 mph winds, bounced off the Jersey Shore as a minimal hurricane and finally came ashore as a tropical storm over the city of New York.
About 1,700 people in the Wayne, Paterson, Little Falls, Totowa and Woodland Park areas were forced to evacuate when the Passaic and other nearby waterways flooded. Some of the people Obama met had dragged their waterlogged belongings out to the curb.
During Sunday's visit, Obama hugged several people, including one woman who was overcome with tears, and at one point he theatrically rummaged through his pockets for change.
"I know it could have been worse, but we should not underestimate the heartache that's going through these communities and affecting a lot of these families," the president said.
Obama viewed the Passaic, which had crested Tuesday at seven feet over its flood stage, from a bridge in downtown Paterson and visited a relief center set up in the parking lot of a home-improvement store. About 600 utility customers remained without power in the Paterson area, out of about 6,600 remaining outages statewide.
The president was accompanied by various officials, including New Jersey Gov. Chris Christie, a Republican, and the state's two Democratic U.S. senators, Frank Lautenberg and Robert Menendez. FEMA Director Craig Fugate and the agency's coordinating officer, Bill Vogel, also appeared with the president.
Tweet
Pope Shenouda Article