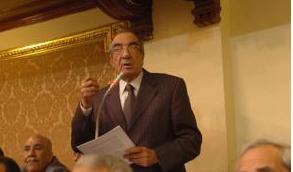 CAIRO - An Egyptian court has set October 24 for the first session in the trial of the former chief of staff of ousted President Hosni Mubarak on charges of corruption and illegal profiteering, Egypt's news agency MENA reported on Sunday.

In August, the head of Egypt's anti-graft authority, Assem el-Gohari, ordered former chief of staff Zakaria Azmi be tried in a criminal court over his alleged use of his office to amass wealth unlawfully, mostly through property deals.

Azmi's brother-in-law, Gamal Abdel Monem Halawa, will be tried with him on similar charges, MENA reported.

Shortly after Mubarak was ousted in February, Egypt froze Azmi's assets, along with those of other former senior officials, after protesters demanded tougher action against officials who they accused of massing wealth at the expense of ordinary Egyptians.