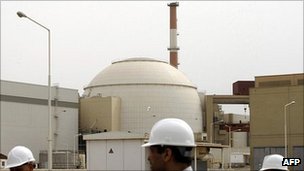 Iran's first nuclear power station has been connected to the country's electricity grid, state news reports.
Bushehr was supplying 60 megawatts of its 1,000 megawatt capacity to the national grid, officials said.
The reactor's generating unit began operating at a low level in May, prompting Israel and other nations to express fears the reactor could help Iran develop nuclear weapons.
Tehran says its intentions are purely peaceful.
But the International Atomic Energy Agency (IAEA) has said it is "increasingly concerned" that Iran is also secretly working on components for a nuclear weapons programme.
Dogged by delays
Iran's Atomic Energy Organisation said the plant in the country's south was connected to the national grid at 23:30 (19:00 GMT) on Saturday.
The connection had initially been scheduled for late last year but, as with developments at Bushehr since the project began in the 1970s, it was dogged by delays.
Construction on the plant was abandoned after Iran's 1979 Islamic revolution until the mid-1990s, when Moscow reached a billion-dollar deal with Tehran to complete it.
In February, Iran had to remove fuel from the reactor "for technical reasons", amid speculation that the Stuxnet computer virus may have been responsible.
The United States and other Western nations for years urged Russia to abandon the project, warning it could help Iran build atomic weapons.
But an agreement obliging Tehran to repatriate spent nuclear fuel to Russia eased those concerns.
In February, an IAEA report obtained by the BBC and made available online by the Institute for Science and International Security (Isis) - said Iran was "not implementing a number of its obligations."
These included "clarification of the remaining outstanding issues which give rise to concerns about possible military dimensions to its nuclear programme".
Six world powers are negotiating with Iran over its nuclear programme, and the country is subject to United Nations Security Council sanctions over its refusal to halt uranium enrichment.
Enriched uranium can be used for civilian nuclear purposes, but also to build atomic bombs.
Tweet
Pope Shenouda Article