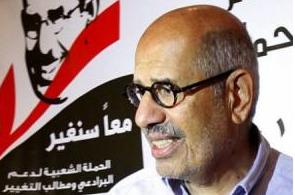 'Holding elections on the basis of individual candidacy system involves a lot of risks in view of the current security situation in the country,' the Nobel laureate told the independent newspaper Al-Shorouk. Several opposition groups are demanding the military council, which has been ruling Egypt since former president Hosni Mubarak was ousted in February, to scrap the individual candidacy system, warning that loyalists to Mubarak will exploit it to return to parliament. No exact date has been set for the parliamentary elections, although they are expected to be held later this year. 'There is no security control ... and Egyptians do not feel secure,' added ElBaradei, the former chief of the International Atomic Energy Agency. Egypt has seen a surge in violence following a popular revolt that unseated Mubarak. Government officials blamed the violence on Mubarak's supporters and inmates who escaped from prisons during the revolt against the former president. 'The situation is unclear. When will the parliamentary or presidential elections be held? When and how will the new constitution be drafted?' said ElBaradei. Egypt's military junta has removed restrictions on establishing political parties. However, some politicians have called for delaying the elections to allow more time for the new parties to make their presence felt, saying that the influential Muslim Brotherhood and Mubarak's loyalists are set to sweep any imminent election.