Egypt hospital in a critical condition 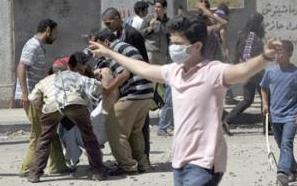 CAIRO - Qasr el-Aini, the largest State-run hospital in Egypt, which offers free medical services to thousands each month, is facing a security crisis that has compelled its administration to intermittently close its doors.

The medical and nursing staffs of the hospital have been working since the January revolution in severe conditions on its premises, caused by thuggery, armed attacks and violent threats by families of patients.

The emergency department, in particular, has witnessed constant daily fights where families of patients request immediate admission, more often than not by force, regardless of the actual capacity of the hospital or the busy schedule of emergency doctors.

In the middle of this month, the emergency staff were taken surprised by an armed attack at a time when the military police squad guarding the establishment withdrew from the scene, leaving the hospital with no option but to refuse admitting patients until security is maintained.

Established since l827, the hospital has always been a safe haven for poor Egyptians that cannot afford private hospitals. Qasr el-Aini has mainly fulfilled the high demand of an increasing number of patients suffering cancer, renal failure, cardiac problems and other such life-threatening conditions.

But the pressure has been excessive; taking into account the deadly clashes of the revolution and the security breakdown that has caused an escalating crime curve.

The hospital staff, whether doctors, interns or nurses, are used to long hours of strenuous work with an average of 4,000 operations being held each month and the emergency department receiving from 400 to 500 cases daily before the revolution.

However, according to the hospital records, the average emergency cases has risen in number to l,000 daily since January 25.

“We are trained to work under tough conditions. But people’s offensive acts and threats towards the staff together with the humiliating treatment is unbearable,” Alia el-Sayyed, a senior nurse told Al-Ahram Arabic newspaper.

Alia was referring, in particular, to a change in the ‘quality’ and identity of patients. “Some break into the hospital under the effect of drugs while others lie down in the hospital corridors and yet we cannot turn them out for fear of our lives’, she added.

According to eyewitnesses, the daily clamour, fistfights and other distractions that prevent the medical staff from concentrating has turned the place into a circus.

“Despite all this we cannot withdraw from the scene because of the humane nature of our mission”, Sara Hassan, a 24-year-old intern, told The Gazette. She described how her male colleagues step forward, trying to calm down angry families who are sometimes armed with knives and even pistols.

Some of the senior doctors are today seen in the hospital corridors with licensed nine-mm guns in their pockets, she added.

Following the killing of five members of the Egyptian police force on the Egyptian-Israeli borders and the ensuing gathering of angry Egyptians in the vicinity of the Israeli Embassy, some l20 Qasr el-Aini interns have staged a sit-in.

They are anticipating a resultant further deterioration of working conditions inside the huge medical establishment.

Feeling bitter over the development of events Moataz Abul Azm,  the head of the hospital emergency department, is wondering where patients will go, should the hospital close down, considering that Qasr el-Aini receives l50,000 cases per month.

He pointed out that the middle class has, in the past few years, increasingly sought treatment at the hospital owing to the high fees of private hospitals.

Dr Abul Azm added that the pressure today is beyond the capacity of the junior staff, referring to the inability of some of the interns to take adequate rest between shifts being compelled to work extra hours to face the growing number of injuries.

“And, yet, I find myself compelled to refer those refraining from work to legal investigation because the hospital cannot afford to lose the effort of its staff at this critical time,” said Dr Abul Azm.