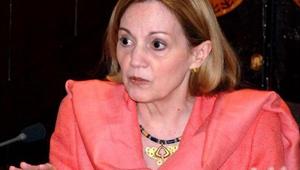 CAIRO: US diplomats in Cairo denied Friday any link between the departure of the director of the USAID in Egypt and complaints by the Department of State about rising “anti-American sentiment” in Egypt.

Jim Bever departed his post after less than one year one day after the US raised concerns with Egypt's interim military rulers about rising anti-Americanism in the country.
"He will return to Washington to take a unique opportunity as an instructor at the War College to help others throughout the US Government learn from his wealth of experience working in the most challenging and fragile environments in the world — including Afghanistan, Pakistan, Iraq, and the West Bank and Gaza," said Elizabeth O. Colton, spokesperson at the US Embassy.
The Associated Press claimed that Bever left due to the "dispute between the two longtime allies over American funding for pro-democracy groups."
Senior Egyptian officials at the Supreme Council of the Armed Forces (SCAF) have been accusing a number of political groups like the April 6 Youth Movement and the Kefaya Movement for Change of receiving foreign funds to serve certain agendas.
The Egyptian government formed a fact finding committee to investigate the funding of civil society organizations and unlicensed foreign organizations operating in Egypt.
The Wall Street Journal charged that Egypt's Supreme Council of the Armed Forces is behind a xenophobic campaign in which the generals have repeatedly denounced non-governmental organizations that accept US aid money as traitors.
"The US provides funds for civil society groups in Egypt and in many countries around the world to support the growth of democratic institutions and promote citizen awareness and engagement in civic activities," Colton said.
"Egyptian groups that apply for and receive grants from the United States are engaged in activities that are politically neutral; no funds are provided to political parties," she added.
She explained that "rigorous" standards are applied to ensure all funds are used in accordance with terms of the grant.
USAID is set to deploy a new leadership team to Egypt — including a new Mission Director and Deputy Mission Director — in conjunction with the new US Ambassador and Embassy leadership team.
Tweet
Pope Shenouda Article