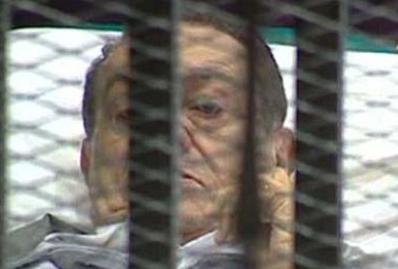 The opening of Hosni Mubarak’s trial last week was undoubtedly a historic day for Egyptians. With the trial now underway, Egypt has escaped two extreme fates: A failure to bring their ex-president to trial, on the one hand, and holding him accountable before an exceptional revolutionary court, on the other. Both scenarios would have posed a serious threat to the rule of law that Egyptians wish to establish. Thankfully, Mubarak is being tried by a regular court in accordance with normal laws.

Few Egyptians turned out to support the former president. When compared to other political leaders in modern Egyptian history, Mubarak's popularity seems to be lacking. Only a few thousand people rallied in his support during the revolution, while millions poured into Tahrir Square to call for his ouster. Fewer still rose to his defense as the trial commenced last week.
The Arab world has seen dictators much crueler than Mubarak -- Libya's Muammar Qadhafi, Syria's Bashar al-Assad and Yemen's Ali Abdullah Saleh -- who were able to rally hundreds of thousands of supporters, often mobilizing tribal, sectarian or other loyalties. But the deposed Egyptian president has been incapable of garnering such support. The minority who cheered for him, often hypocritically, while he was in power abandoned him once he was forced out. An even smaller group who now oppose Mubarak’s trial are in large part motivated by humanitarian sentiments rather than a genuine allegiance to their ousted president.
Popular support for Mubarak may be the weakest ever for an Egyptian leader. After the 1952 Revolution, many Wafdists remained loyal to the principles of their party and to their leaders, Saad Zaghloul and Mostafa al-Nahhas. Likewise, when Anwar al-Sadat came to power in 1970, Nasserists remained devoted to Nasser’s ideals. After Sadat’s assassination in 1981, many Egyptians continued to defend the ex-president and the Egypt-Israel Peace Treaty that he signed.
Mubarak is unlikely to enjoy any such legacy. He showed no interest in the Egyptian people and had no vision for the country. Never before has Egypt seen a ruler with so much contempt for the people and no sympathy for their pains. Under his rule, Egypt suffered a mass brain drain and an unprecedented deterioration of its state’s institutions, all so Mubarak could hang on to power and, if possible, pass it on to his son.
Throughout the revolution, Egyptian protesters hoisted images of Nasser and Sadat, as both have left their marks on people’s lives. Mubarak, on the other hand, ignored an entire nation and will be quickly forgotten, even by those who favored his capitalist polices and his close relations with Israel and the US.
Instead of seeking revenge on Mubarak, Egyptians should give him a fair trial, turn over a new leaf and look ahead because the future bears challenges that will be much more serious than the trial of the toppled president.
Tweet
Pope Shenouda Article