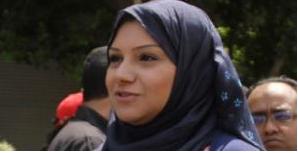 CAIRO – Military prosecutors are reported to have started interrogating a female political activist called Asmaa Mahfouz, a member of the 6 April protest movement, for what a source says is inciting murder.

The source told the Arabic-language daily Al-Ahram that Mahfouz wrote on the wall of her Facebook account that armed groups will have reason to carry out assassinations in the future, if the courts do not sentence policemen and officials accused of killing peaceful demonstrators in January and profiteering from their jobs.
As the interrogation of Mahfouz continued yesterday, tens of her supporters staged a protest against the interrogation, calling for her release.
Tweet
Pope Shenouda Article