Afghanistan: Many die in assault on governor's compound 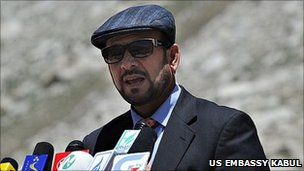 At least 19 people are dead and many are injured after militants in Afghanistan stormed the provincial governor's compound in Parwan.

Powerful explosions followed by bursts of gunfire were heard in the provincial capital, Charikar, an hour's drive north-west of Kabul, witnesses said.
The governor, Abdul Basir Salangi, told media from inside the compound that up to six suicide bombers had struck.
The Taliban say they carried out the attack, which lasted at least an hour.
The BBC's Quentin Sommerville says Parwan is usually relatively peaceful.
However, under-equipped police there have been struggling both to resist Taliban militants and a rising crime level.
Close quarters
Militants attacked the compound just after 11:00 (06:30 GMT), the Afghan interior ministry said.
A suicide car bomb was detonated, after which five other militants wearing bomb vests broke into the compound, police said.
Mr Salangi told the BBC: ''A suicide attacker wearing a police uniform... detonated his explosives outside the northern gate. Then five others attacked my office.
"They managed to get inside the compound to the halls. The fighting went on for one hour."
Police and intelligence sources told the BBC the compound had been attacked from several directions.
Fighting was so fierce that government forces were sometimes just a meter (yard) from their attackers.
"They even got close to the governor's office... but his bodyguards opened fire, killing the last attacker, who was using a rocket-propelled grenade," a police source said.
Security at the compound had been reinforced after a recent attempt to kill the governor, an important ally of President Hamid Karzai, the BBC's Bilal Sarwary reports.
Officials killed
A meeting of security chiefs was under way when Sunday's attack occurred.
Local police and intelligence chiefs were present, along with advisers from the international coalition.
According to the independent Afghan news agency Pajhwok, most of the victims had come to the governor's house to collect their national identity cards.
At least two US military officials were taking part but were unhurt, according to provincial police chief Sher Mohammad Maladani.
The governor's compound has come under attack on previous occasions.
The Taliban recently appeared to change their tactics, launching attacks on prominent figures or targets which were deemed to be particularly well-protected.
Tweet
Pope Shenouda Article