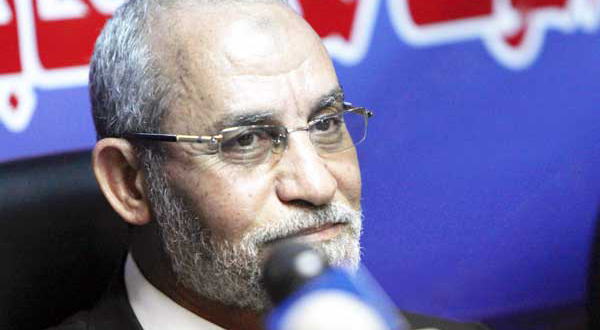 CAIRO: During its annual iftar Saturday, the Muslim Brotherhood (MB) called for political unity between all national currents in order to go through the transitional period “peacefully and safely”.

The group also demanded the swift transfer of power from the Supreme Council of the Armed Forces (SCAF) to a civilian authority according to the time schedule set out in the SCAF’s constitutional decree, respecting people’s will and using democratic means to manage ideological and political conflicts.
“Egypt with all its figures and streams are meeting now after they all participated in achieving this victory … now we are partners in the process of building Egypt and its renaissance,” said the MB’s Supreme Guide Mohamed Badei.
“It is now necessary to end our ideological differences and mobilize the nation’s energies toward what ... is important for the people and their day to day struggles against poverty, unemployment and poor services,” he added.
The iftar ceremony was attended by a number of political parties, public figures, religious scholars and foreign ambassadors who also underlined the importance of unity in this phase.
“In the past few weeks we saw for the first time demonstrations that divide rather than unite us at a phase that requires coherence so we can be completely devoted to the process of building,” Al-Sayed Al-Badawy, chairman of Al-Wafd Party, told Daily News Egypt.
“We invite all political parties to join the Democratic Alliance to build the political structure of the country in the next five years. The next parliament should be one of consensus rather than a majority and a minority,” he added.
Al-Badawy, who heads Egypt’s oldest “liberal” party said that new parties inexperienced in politics are “harming” the image of Liberalism which has always been in line with religion.
Deputy Prime Minister Ali Al-Selmy, and Minister of Information Osama Heikal represented the government at the ceremony in the absence of any members of SCAF who did not attend even though they were invited.
“Everyone who can help is welcome; this phase needs unity and giving up disputes and this is the only way to build a new democratic structure in the country,” Al-Selmy said.
The Grand Mufti Ali Gomaa, a number of Azhar scholars and representatives from the Coptic Church also attended.
Ayman Nour, however, was the only presidential hopeful to attend.
The MB’s annual iftar usually brings together political, sports and intellectual figures but they were occasionally banned from holding the iftar under the reign of the ousted regime.
Earlier on Saturday, the group held its first ever public Shoura Council elections, where 122 members of the Brother’s administrative body chose new members of the Guidance Office: Mohamed Ahmed Ibrahim, Abdel Azim Abu Seif and Hossam Abu Bakr to replace Essam Al-Erian, Saad Al-Katatny and Mohamed Morsi who now hold leadership positions in the Freedom and Justice Party (FJP).
According to the group’s bylaws, no MB member can hold administrative posts simultaneously in both the party and the group, neither can any member join a political party other than the group’s FJP.
The elections were covered live by media, hailed as an indi of the new age of freedom following the popular revolt that ousted ex-president Hosni Mubarak. It is also proof of the group’s commitment to separating the party from the MB as a whole.
“We meet today for the fourth time in six months to show the world the performance of the MB after the tyrannical regime attempted to distort our image,” Badei said at the meeting.
The Guidance Office (the group’s executive board) consists of 16 members, with at least one member representing each of the state’s seven geographical sectors; its decisions are binding to all members of the MB.
Tweet
Pope Shenouda Article