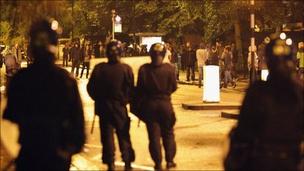 Police have condemned a wave of "copycat criminal activity" across London in a second night of looting and disorder following riots in Tottenham.

More than 100 people have been arrested as officers were attacked, police vehicles damaged and shops looted and damaged in parts of London.
Disorder spread to Enfield, Walthamstow and Waltham Forest in north London and to Brixton in the south of the city.
Some 35 officers have been injured over the two nights of rioting.
Three officers were hurt when a vehicle hit them as they tried to make an arrest in Waltham Forest, east London.
Clashes broke out in Enfield, north London, on Sunday evening where shop windows were smashed and a police car damaged.
'New trainers'
There have been reports of a gang of up to 200 youths looting shops and charging police in Coldharbour Lane and the High Street in Brixton, south London.
Metropolitan Police Commander Adrian Hanstock said: "This is not groups of people acting on behalf of communities or with any consent.
"This is individuals who are actually attacking communities, businesses, properties and houses and actually causing a huge amount of upset and criminality."
The Met said it had dealt with several incidents of "copycat criminal activity" across the city.
These included:
Three officers injured after being hit by a vehicle in Chingford Mount, Waltham Forest, at about 00:45 BST
More than 30 youths vandalising and looting a number of shops in Walthamstow and Waltham Forest
Vandalism carried out by about 50 youths in Oxford Circus, central London
A police vehicle being attacked in Islington, north London
A shop on the King's Road in Chelsea damaged
A Tesco store in Ponders End being attacked and items stolen
Kit Malthouse, Deputy Mayor of London and Chair of the Metropolitan Police Authority, described the scenes of the last two nights as "disgusting and shocking" and said the police did a good job.
He added: "Obviously there are people in this city, sadly, who are intent on violence, who are looking for the opportunity to steal and set fire to buildings and create a sense of mayhem, whether they're anarchists or part of organised gangs or just feral youth frankly, who fancy a new pair of trainers."
Talking about the impact on the capital's image, one year ahead of the Olympic Games, he said: "It's pretty rotten for London, it does not look good.
"What we need to do over the next few months is to underline to people the fundamental truth about London which is that it is one of the safest, great big cities on earth.
"We have a low murder rate and this kind of violence is very rare."
The Home Secretary, Theresa May, said: "Last night, police officers again put themselves in harm's way to protect Londoners and their property.
"Londoners have made clear that there are no excuses for violence, and I call on all members of local communities to work constructively with the police to help them bring these criminals to justice."
'Rocks and bottles'
BBC London's Paraic O'Brien said he had witnessed widespread looting in Brixton.
He said: "They smashed a William Hill, they set bins on fire.
"And now what we're seeing as the night progresses is that replicated, sort of flashpoints all along Brixton High Street.
"I'm standing outside Halfords on the other side of the road and they've just smashed through the doors of Halfords. They're taking bikes out the front entrance.
"I have to say, what really struck me was the small number of police officers that there actually seem to be on Brixton High Street responding to this."
Press Association photographer Lewis Whyld saw looters battle police at a Currys store in Brixton.
He said: "A couple of hundred youths were rioting and looting. Riot police went in to get them out and there was a big fight in the street.
"Youths were throwing rocks and bottles and there was a bin on fire. They used a fire extinguisher to push the police back so they could get back into Currys and continue taking things out."
Met Police Commander Christine Jones said: "Officers are shocked at the outrageous level of violence directed against them.
"At least nine officers were injured overnight in addition to the 26 injured on Saturday night."
London Fire Brigade said it had been called to a number of fires in Enfield, Brixton and Walthamstow, including a fire at a shop on Brixton Road, which is now under control.
'Greed and criminality'
The disorder follows rioting in Tottenham which broke out on Saturday night and continued into Sunday morning.
A peaceful protest over the fatal shooting by police on Thursday of 29-year-old Mark Duggan descended into violence later in the evening.
The unrest spread into nearby Wood Green and Tottenham Hale. Shops were attacked and looted, 26 police officers and three others were injured and buildings and vehicles were set alight.
Deputy Assistant Commissioner Steve Kavanagh told the BBC Radio 4 Today programme that there were too few officers in Tottenham on Saturday night, but blamed Twitter for fuelling looting and violence, saying: "Social media and other methods have been used to organise these levels of greed and criminality."
Mr Kavanagh pledged that more officers would be on London's streets on Monday night to prevent or tackle further outbreaks.
Parts of Tottenham are still cordoned off, as officers and forensic specialists continue to examine the riot scene.
A total of 61 arrests have been made in connection with the first night of rioting. The majority were for burglary, and other offences including violent disorder, robbery, theft and handling stolen goods.
Sixteen people have been charged for offences including burglary, violent disorder and possession of a pointed or bladed weapon following the Tottenham riots.
As well as Mr Duggan, a police officer was also shot in Thursday's incident, which happened in what was called a "pre-planned" event, under Operation Trident, which investigates gun crime in London's African and Caribbean communities.
Police had stopped a minicab which Mr Duggan had been travelling in.
Tweet
Pope Shenouda Article