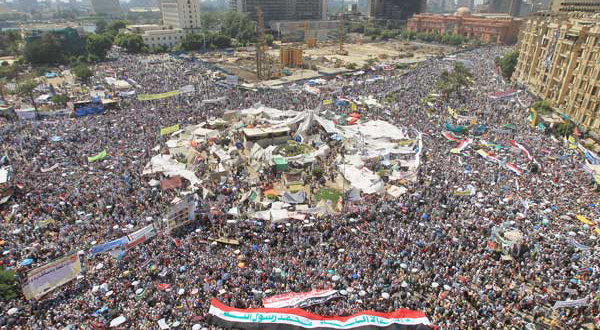 CAIRO: Tens of thousands of Islamists who gathered in Cairo’s Tahrir Square refused a list of proposed supra-constitutional principles meant to guide the drafting of a new charter after parliamentary elections in November, and demanded the implementation of Sharia in what was slated to be "Friday of Unity".

It was the biggest crowd to fill the square since mass protests ousted president Hosni Mubarak in February.
Protestors chanted slogans promoting Egypt’s Islamic identity and demanded the respect for the people's will expressed in the results of a March referendum on constitutional amendments.
They also reiterated demands for swift trials of ousted president Mubarak and other regime figures as well as the cleansing of the judiciary and other state institutions.
"We have the right to create awareness among people of the importance of applying Sharia as Muslims … everyone is free to choose in the elections and we welcome those who disagree with us and always engage in dialogues with them," said Abdel Moneim Al-Shahat, spokesman of the Salafis, ultra conservative Muslim groups who flocked to the capital from the provinces in busloads.
The Islamist groups who dominated the square labeled the protest the "Friday of Popular Will" and "Friday of Sharia" and said that attempts to issue binding supra-constitutional principles was a run around the people's will. While they expressed support for the Supreme Council of the Armed Forces (SCAF), they demanded that it hands over authority to civilians as soon as possible.
A coordinating committee of protesters issued a statement agreed on by all participating powers including the Salafis and the Muslim Brotherhood (MB) demanding the trial of Mubarak and his transfer to Tora Prison, cleansing the Ministry of Interior and the general prosecution as well as setting a minimum and maximum wage.
"This is the people's say and this is our identity, we refuse constitutional principles and demand the application of God's law," said Islamic scholar Safwat Hegazy, who is also a member of the committee.
Protesters refused both the idea of a civil or secular state and said they wanted an Islamic state.
"Secular and socialist states failed in Turkey and Russia. We want an Islamic state that applies God's law and we don't want some groups to override the people's will which we represent today," said Mahmoud Rafeeq, an engineer.
"Some political powers failed to impose their secular state model and are now using constitutional principles to achieve their goals, but we will abide by the people's will even if they don't want an Islamic state," said Essam Aboul Fotouh from Portsaid.
Tens of buses were seen in streets leading to and from Tahrir Square that carried protesters from different governorates, mainly followers of the Salafi groups.
Later in the afternoon, more than 33 political parties and groups including the Coalition of the Youth of the Revolution, April 6, the Free Egyptians Party, the Democratic Front Party, the Egyptian Social Democrats, leftist parties and a number of movements withdrew from Tahrir saying that Islamist groups violated the agreement not to make controversial demands.
"After we had an agreement aimed at hindering SCAF's attempts to disperse revolutionary powers and put them in a confrontation with each other, we were surprised by the violation of some Islamists who raised controversial banners and chants," said a joint statement.
They accused Islamic powers of striking a deal with SCAF to support them in return for achieving their "direct and narrow" interests.
Over the course of two days, Islamic and civil powers agreed on focusing on common demands and refraining from religious slogans. They called the protest the “Friday of Unity."
"We will continue our sit-in and will raise our demands for the rights of martyrs' families, minimum and maximum wage, sacking the prosecutor general and putting a time schedule for the handing over of power from the SCAF to civilians," the statement said.
Towards the end of the day, protesters, mainly affiliated with Islamic groups, were seen leaving the square.
Hegazy said that protesters would break the fast and pray together next Friday in the Square, which will be the first Friday in the holy month of Ramadan.
Essam Al-Erian, deputy chairman of the MB's Freedom and Justice Party (FJP), denied that they violated the agreement and said that unorganized groups were responsible.
"The groups which agreed on the statement didn't violate it. What happened was that unorganized groups reacted to voices that raised the ceiling of demands and called for civil disobedience and organized marches to the SCAF demanding its overthrow which we didn't agree on," he said.
"Salafi groups are divided into two. The organized ones mostly abided by the agreement. It’s the disorganized ones which raised slogans tackling the identity of the state and the source of legislation, which are issues that everyone agrees upon," Al-Erian said.
He said that election season is coming up and many political coalitions will emerge.
Masr Al-Hurreyah Party (Egypt Freedom) announced their withdrawal from a document charting constitutional principles by the Democratic Alliance — a coalition started by the Brotherhood and Al-Wafd comprising 28 political parties — and called for launching a new coalition with the Free Egyptians Party and other non-Islamist powers.
Tweet
Pope Shenouda Article