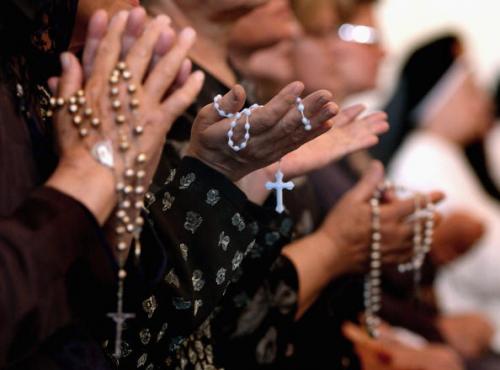 Assyrian Christians are fighting to save their culture, their people group, their faith and their lives on the Nineveh Plain in Iraq, and an Assyrian-born filmmaker has produced a documentary about his people's fight for life.

Producer Andre Anton's film, "Defying Deletion: The Fight Over Iraq's Nineveh Plains," tells the story of Iraq's indigenous Christian population and their struggle to avoid being wiped out.
In an effort to gain support for his cause, Anton showed his film to an audience of members of Congress.
The project is described as "an emotionally charged documentary that focuses on the struggle of the Assyrian race in Iraq."
Christians have been in what now is Iraq, literally, since the time of Christ, but since the U.S.-led invasion in 2003, they have been the target of ethnic cleansing, cultural genocide and region-based killing. The documentary reveals more than 70 churches have been bombed and hundreds of Christians killed, with hundreds of thousands fleeing.
Anton says his objective for making the film was two-fold.
"I want the members of the U. S. Congress to see it, and I want the leaders in the E.U. to see it. The European Union recently passed legislation to protect indigenous minorities," Anton said.
(Story continues below)
"So my hope is to get the Congress to see it, and the European Union to see it, and to hopefully get them to take action to protect the indigenous people in their homeland," Anton said.
The film points out that almost half of Iraq's Assyrians have had to leave Iraq since 2003.
"They (the Assyrians) really have no choice now but to accept the circumstances that are presented to them," Anton said.
He said the Assyrians have been scattered, with "family members that live outside the country now and live in the United States, Canada and Australia, the United Kingdom, Sweden."
There have been organizations set up to help the minority population, and some have worked at the project; others simply have failed, he said.
"The [U.S.] State Department entrusted $40 million to help the indigenous minorities, Many were moving from the cities to the north where they had extended families," Anton said.
He said, "They pretty much left all [their property] and hoped that they could start in the northern part of Iraq, and of course, that's not the case. The State Department distributed the money improperly, mostly to Kurdish organizations."
The website explains that the Assyrian people ethnically are not Arabs or Kurds. While some Assyrians speak Arabic and some have learned the Kurdish dialect, Assyrians speak Aramaic.
The site also says that the Assyrians are indigenous to the area of northern Iraq and are among the largest original people groups to adopt Christianity.
Heritage Foundation analyst James Carafano says religious minorities, especially Christians, are having difficulties.
"That's symptomatic of all of the Christian communities throughout the Middle East. I mean, the Arab Spring has not treated them well," Carafano explained.
He points to Syria as an example.
"In some cases, for example, the religious minorities have been supportive of the government in Syria, which is nuts … because they're awful," Carafano said. "Their belief is that as bad as Assad is, they might be worse off with somebody else."
"I would say religious minorities in general have not fared exceedingly well in the Arab Spring," Carafano said. "Ironically they might be a little better off in Iraq than in other places."
Anton said he's told Assyrians are at the mercy of the Muslims in the Kurdish areas.
Some progress is present, as WND reported last year, when Iraq's 16 predominantly Christian political parties worked out an agreement with the Iraqi government to form a Christian province in the region called the Nineveh Plain.
The process to form an Assyrian Christian province first began in 2006 when an Assyrian U.N. delegation applied for permission.
Carafano echoes the idea that progress is being made.
"It's not as bad in Iraq as it is in some other countries, but again, religious minorities aren't faring very well anywhere in the Middle East these days," Carafano said.
"They have terrible neighbors in Iran [who] are continually meddling in Iraq. Syria's a complete basket case, but compared to the rest of the Middle East, it's not half bad. Iraqis at least today have something that they've never had before which was hope," Carafano said.
"They can actually hope for a future," Carafano added. "At least now they have the option of choosing their future."
Even with the progress, Anton said the Christians face an uphill battle, mostly because of the exploitation by the Iraqi Kurds who also live in the Nineveh Plain.
"A lot of times these Kurdish organizations would get the money and give it to the churches and the people living around the churches are living in extreme poverty," Anton said.
"To the world, they see the churches being built and they say, 'Kurdistan is helping to build churches,'" Anton continued.
"But in reality they're focusing the money on the churches. On the one hand they look good, but on the other hand they leave the conditions so harsh that the Assyrians will actually want to take chances and live as a refugee somewhere else," Anton said.
Anton explained the situation as a deliberate plan to force the Assyrians to leave their homeland. This gives the Kurds an opportunity to gain further wealth and power in the region.
"When the Assyrians leave the have to sell their homes … the first people to buy their homes are people tied to the Kurdish regional government, the KDP and the KRT," Anton said. "So they (the Kurds) wind up buying those lands, basically taking them over and moving in a Kurdish population."
"So on the one hand you're facing extremism and on the other hand you're facing extreme poverty and conditions. It's kind of like this circular push to keep them so the culture disappears," Anton said.
"That's what they (the Kurds) want, is the culture (of the Assyrians) to disappear," Anton added.
Tweet
Pope Shenouda Article