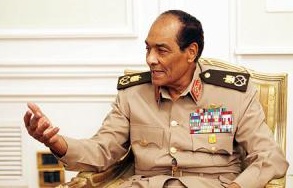 CAIRO—The head of Egypt's ruling military council has praised the youth who led the uprising that toppled President Hosni Mubarak, in an apparent effort to diffuse tensions between activists and the army.

In a brief address Saturday on state TV, Field Marshal Mohamed Hussein Tantawi called the youth activists "a great product of Egyptian soil" and saluted them for making history. Many protesters have grown mistrustful of the military since it took power Feb. 11, accusing it of dragging its feet in bringing former regime officials to trial. Tantawi's comments come hours after protesters marching on the Defense Ministry and military council headquarters scuffled with soldiers. Activists have planned to rally outside the headquarters again Saturday to press their demands.