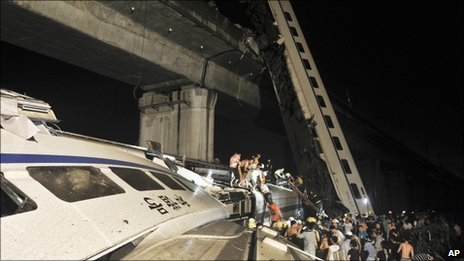 An express train has derailed in eastern China, the country's official news agency Xinhua says.Two of the train's coaches fell off a bridge after derailing in Zhejiang province, local fire fighting sources were quoted as saying. It is not known if there any casualties.

The train was travelling from Hangzhou to Wenzhou when it went off the rails at about 2030.
China is spending billions on constructing a high-speed rail network.
Xinhua said the train, numbered D3115, derailed at Shuangyu town in Wenzhou, and rescue workers were at the scene.
It said the capacity of each carriage was about 100, although the number of people on the train has not been confirmed.
Last month China inaugurated its Beijing-Shanghai high-speed rail link.
The 300 km/h (190mph) train halves the journey time to under five hours.
China is planning to roll out high-speed lines across the country.
But the project has come under fire for its high cost - the Beijing-Shanghai line cost 215bn yuan ($33bn; £21bn).
The BBC's Martin Patience in Beijing says there are also fears corruption has compromised safety in the network's construction.
Tweet
Pope Shenouda Article