Problems on hold:Time bombs of extremism 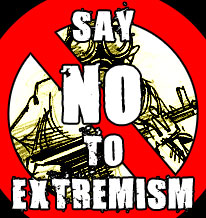 The extremist thought which spreads a culture of hate and discourages accepting the ‘other’ is now on the rise. It has been steadily infiltrating our society, streets, public transportation, and even private cars. Whether you are on the underground metro or stuck in a traffic jam, someone would suddenly appear and toss a booklet at you. In the past, people would have swiftly skimmed through the booklet before the vendor would come back for it or for the money. Today these little books are handed for free and their content is exclusively extremist; obviously the extremism which undermines our society’s values is funded by those who publish and distribute these books.
The question which begs an answer is what the security apparatuses are doing about these practices. Are they familiar with what is going on? Why do they turn a blind eye to it if not actually bless it? Is not it their duty to take action against whatever jeopardises society’s stability? More often than not, we hear about security apparatuses monitoring and arresting members of extremist groups that conspire against the homeland. Material published by these groups is confiscated on grounds that it incites violence and poses a threat to the ruling regime. Blogs are monitored and a few bloggers were arrested for the thought they spread on the Internet. So why do not we hear about similar campaigns against those who are responsible for he booklets distributed in streets by men with beards and jilbabs and women wearing niqab?
It may be argued that freedom of expression is guaranteed and thought should only be countered with thought, not oppression. Absolutely. But this principle should be applied within the legitimate channels of spreading thought by encompassing a wide spectrum of ideologies. Books disseminating enlightened and extremist ideas alike sit on bookstore shelves waiting to be read.
This is what freedom of thought is all about. But it is not acceptable that certain thought is imposed on people.  Such catastrophic thought often targets uneducated people in the street, and has nothing to do with freedom of thought. It is a case of fundamentalism and extremism winning the hearts and minds of innocent people. The fact that security apparatuses disregard the entire issue could result in a disaster that explodes in the faces of all Egyptians.
Among these time bomb booklets is one entitled Al-Walaa’ wal- Baraa’ (Loyalty and Repudiation) written by Saleh Al-Fawzan and published by an Alexandria publishing house named Al-Rahma. Let us go through some parts of the book:
• “Islamic faith obligates a Muslim to be loyal to fellow Muslims and to be an enemy of the enemies of this faith, especially people of the Book (Christians and Jews). Many people are ignorant of this fact; an Arab broadcast disseminated a saying by a cleric claiming that Christians are our brothers. This is very dangerous thought.
• “Imitating apostates in the way they talk, dress, or behave displays loyalty to them. Muslims should not imitate them by shaving their beards or growing a moustache.
• “Living in apostate countries constitutes loyalty to non-believers. Muslims should leave these countries unless they stay there to spread their faith. Otherwise Muslims are banned from visiting these countries for entertainment or recreation. Exceptions to this rule include travelling for medial treatment, trade, or education in fields that exist only in these countries.
• “Helping and siding with apostates against Muslims is a disloyalty to Muslims, a sign of apostasy. It is prohibited to seek help from infidels, trust them, appoint them in positions that make them acquainted with Muslims’ secrets, or employ them as consultants. These days apostates are brought to work in the nations of Muslims.
• “Using the AD calendar is a loyalty to apostates. Muslims should not share in celebrating infidel feasts, attending their celebrations, or wishing them happy feast.
• “Heaping praise on infidels for their achievements in terms of civilisation and modernisation, or admiring their ethics and skills, is loyalty to apostates. Muslims should not overlook their religious deviance. They should exploit these achievements of apostates without pleading with them.
• “Asking God to forgive or bless infidels is a loyalty to apostates. This is prohibited since it implies that Muslims love them despite the fact that they are apostates.”
I know that the instructions mentioned in this disastrous book have nothing to do with enlightened Muslims who seamlessly interact with Christians in all spheres of life, in the good times and the bad. Those Muslims are armed with the Egyptian heritage that runs in their blood and the tolerance and gentleness of the religion they believe in. But I know that Egypt is now at a crossroads as the winds of fundamentalism blow and win the hearts and minds of many. If we do nothing to restrain these winds as they blow through our streets, we will find ourselves helpless to avoid the ruin of our society since at one point it would be too late to do anything. I wish I would not hear some of us downplaying the whole issue by resorting to the citizenship rhetoric. Does anyone recall anything about citizenship?
Tweet
Author