Obama trumpets Asia trip as boost to US economy 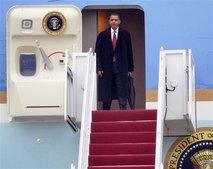 WASHINGTON – President Barack Obama's eight-day trip to Asia produced no tangible wins for the United States, though he is citing talks with Asian allies that he says could help create thousands of jobs and open new markets for American goods in the future.
Citing progress on a trip that took him from Tokyo to Seoul, Obama noted that "Asia is a region where we now buy more goods and do more trade with than any other place in the world — commerce that supports millions of jobs back home."
"I spoke with leaders in every nation I visited about what we can do to sustain this economic recovery and bring back jobs and prosperity for our people — a task I will continue to focus on relentlessly in the weeks and months ahead," Obama said in his weekly radio and Internet address taped while he was in Seoul, the South Korean capital, and released Saturday.
The president pitched his trip as a way to reintroduce the U.S. to those trading partners, including China.
The Chinese government is the United States' biggest foreign creditor with $800 billion of federal U.S. debt, which gives it extraordinary power in the relationship. And Beijing feels the global recession, sparked by U.S. financial industry excesses, vindicates its authoritarian leadership.
Obama told Americans that there can be no solutions to climate change or energy without the cooperation of Asian and Pacific nations. Repeating a theme he used abroad, Obama told the U.S. audience that the discussions directly affect U.S. national security.
"We made progress with China and Russia in sending a unified message to Iran and North Korea that they must live up to their international obligations and either forsake nuclear weapons or face the consequences," he said.
Obama's trip included a town hall-style event with students in Shanghai and discussion about a coming climate summit in Copenhagen. He also prodded China to loosen restrictions on Internet access and increase freedoms of speech and religion.
Obama repeatedly has said the United States does not wish to contain China's rise. Instead, on Saturday, he said that if the United States can increase exports to the Asia-Pacific region by 5 percent, then the markets would create "hundreds of thousands" of jobs as a trading partner.
"Even though it will take time, I can promise you this," Obama said. "We are moving in the right direction ... the steps we are taking are helping and I will not let up until businesses start hiring again, unemployed Americans start working again, and we rebuild this economy stronger and more prosperous than it was before."
Tweet
Pope Shenouda Article