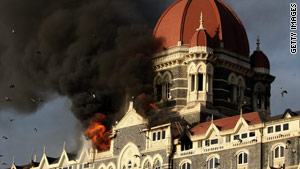 They were arrested in the northern Italian city of Brescia, said Stefano Fonzi, head of Italy's Division of General Investigations and Special Operations.
The attacks on India's largest city lasted four days. The attackers targeted several sites in Mumbai, taking over several hotels and a Jewish center. The attacks left 160 people dead.
On November 25, 2008, the day before the attacks in Mumbai, the two men arrested allegedly transferred $229 that was used to activate Internet phone lines used by the suspects.
Two others connected with the longstanding money transfer agency in Brescia also were arrested for other illegal activity, Fonzi told CNN. Police are looking for a fifth man.
Italian police started their investigation the following month after being alerted by Indian authorities and the FBI that funds had been transferred from Italy, Fonzi said.
Authorities suspected the agency after money was transferred under the Muslim name of a man who had never entered Italy, a police statement said.
Indian police have said 10 Pakistanis were involved in the deadly assault, nine of whom were killed in the carnage.
The lone surviving suspect has linked the coordinated shooting and bombing incidents to the leader of the Pakistan-based Lashkar-e-Tayyiba, a militant group that is banned in India.
Tweet
Pope Shenouda Article