Why I’m against ‘The Poor First’ 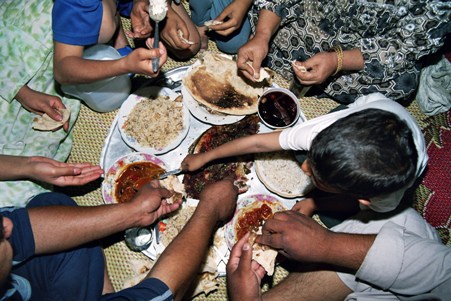 A recent blog post entitled “The Poor First, You Bastards” has received a lot attention in the Egyptian media and cyber world. The blogger, Mohamed Abul Gheit, highlights the role the Egyptian poor played in violent clashes with the police during the revolution and draws attention to a set of pictures of lower-class martyrs – most of which were taken at popular studios with poses and colors that some may look down upon as tacky. Abul Gheit points out that these images never made it to the mainstream media, where photos of young, educated martyrs from the middle class dominated instead.

Since this post was published, some activists have raised the slogan "The Poor First” in response to political elites that are haughtily preoccupied with discussing what should come first, the constitution or elections.
I can’t imagine a group of poor people ever gathering to protest under the slogan "The Poor First", nor is that something I want to imagine. When oppressed groups take action to defend their rights, they don’t use labels like “the poor” unless they’re asking for pity. They organize as workers, farmers or members of communities demanding their rights.
The slogan "The Poor First" reeks of elitism. It’s used by elites that are embarrassed of their status and want to embrace the demands of the oppressed masses. But they see the poor from their own elitist perspective, rather than in the way the poor themselves want to be seen.  The apology offered since then by some elites for their fixation on political issues is also ridiculous. It’s as though Abul Gheit’s post suddenly opened their eyes to the existence of Egypt’s poor who were previously forgotten in the storm of elitist discussions over impending political arrangements.
Now, revolutionary youth groups have called for renewed protests on 8 July under the same slogan to revive the demands of the revolution. Adopting this slogan would appear to transform the revolution from political act into a charity walk, with elites calling on the poor to advance to the front of their ranks.
But the revolution was a political act. Egyptians began by protesting and reacting to police brutality, and then eventually started attacking police forces. After overcoming the police, protesters staged a sit-in until their demands were met. This was accompanied by heated political and media discussions across the country. At this point, Egypt’s middle-class activists and youth, who have better access to technology and the internet and are closer to political and media elites, started to take over.
The revolution was fueled by the dreams and imagination of these middle-class youth and the hopes and anger of other social groups that were fed up with the hardships of their daily lives. The revolution was not carried out by one class against the other; it was a national uprising of an unmistakable political character, eventually led by a class that continues to produce Egypt's political elite.
The growing calls for attention to the poor reflect the elite’s anxieties over the sources of their power, especially since the massive protests in Tahrir have started to fade. It’s an attempt to speak in the name of the masses, a sign that many elites still feel they occupy a privileged position.
Egypt’s elites would do well to remember the real strength of this revolution: On 25 January people went to the streets as individuals or in small groups not knowing who to expect there. They discovered their power when each person showed up representing himself or herself, not anyone else. The slogan “I am going out on 25 Januray” that circulated through Facebook status updates and photos in the lead up to the protest encapsulates what this revolution was really about.
Whoever is looking for the “poor” today will find them in protests and strikes, which have been labeled as “factional” and damaging to the economy. There you’ll find them expressing their demands, not as the poor but as farmers, workers and employees. Engaging seriously with these groups will help turn Egyptian politics from a media theater into a process where everyone can participate as active, rights-bearing agents.
To carry this revolution forward will require us to continue the encounter between different social groups that genuinely express their interests and demands, even if this leads to conflicts and negotiations. As a young blogger, activist and member of the elite, I feel no shame in discussing how to build Egypt’s political system with its new constitution and elections, so long as the social and economic rights of all citizens – including the right to protest and strike – remain at the heart of these discussions. But I will feel ashamed, and in fact worried, if I see people opposing political debate by raising banners in the name of a silent “poor” majority.
Tweet
Pope Shenouda Article