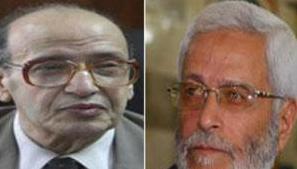 CAIRO - Counsellor Serry Seyam, the Chief Justice of the Court of Cassation and head of the Supreme Judicial Council, Saturday retired from these posts, and will be succeeded by Counsellor Mohamed Hossam Eddin el-Gheriani.

Seyam reached retirement age on April 17, but, according to the Law on Judicial Authority, he had to continue in the post till the end of the judicial year, which concluded Saturday.
El-Gheriani, the oldest among the deputies of the Court of Cassation, will be sworn in Sunday as the new head of the Judicial Council, before Field Marshal Mohamed Hussein Tantawi, head of the ruling Supreme Council of the Armed Forces.
Expectations are high among judges for more independence of the judiciary with el-Gheriani taking over at the Judicial Council, since he belongs to the ‘judicial independence current’.
“Not only the judges but Egypt as a whole should be happy when el-Gheriani takes over, since he will work hard to achieve judicial independence for the good of the Egyptian people,” another deputy head of the Court of Cassation, Zaghloul el-Balsh, told Al-Ahram online.
Tweet
Pope Shenouda Article