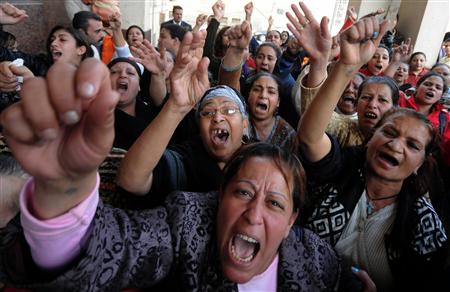 (AINA) -- On Thursday evening, June 30, Muslims looted and torched Christian homes and businesses in the village of western Kolosna in Samalut, Minya province. It was reported that some 10 Christians were injured, but none went to hospital and first aid was administered at home.

Muslim violence broke out when a Coptic couple was returning to Kolosna by bus when the wife was severely sexually harassed by Muslims at the bus terminal. The husband tried to defend his wife but was severely beaten.
Coptic witnesses said that shortly after the altercation thousands of Muslims from the predominantly Muslim east side of Kolosna roamed the western side of Kolosna, which is about 75% Coptic, and started looting and torching Christian property. Christians hid in their homes for fear of attacks by the Muslim mob.
Several calls were made to CTV, Coptic TV Channel, asking for help and besieged resident reported on live television the horror of the mob attacks, saying Muslims surrounded Christian homes and chanted "Allahu Akbar" and shouted "Get their weapons."
"They were cursing the cross and taunting us that we will stay inside and never be allowed in the streets again," said one caller to the television program.
Copts reported that Muslims were armed with swords, batons and guns and they shot into the air.
"There were 3 army and 2 central security vehicles, in addition to one local police car, which was not enough to contain the attack," said an eyewitness, adding "not that they wanted to contain it."
Reports indicate 6 Coptic homes, including the home of the harassment victim ere looted or torched, as well as 3 supermarkets, an auto parts store, a foundry, a timber shop and a clothing store.
Father Estephanos, a priest from nearby Samalut, said in an interview with the US-based Way-TV that the Copts contacted the diocese in Samalut asking for help. "The army commander, the army and the military police were contacted, but arrived three hours later and did not take action while properties were looted and torched. They let everything to happen."
Father Estephanos said that while the army was in the village, beside torching and trying to break into Christian homes, the Muslims were on the main road of Kolosna, searching cars. "If the cars belonged to Christians, its passengers were beaten, insulted and windshields were smashed. If the car belonged to Muslims, it passed safely. All this happened while the army stood there watching." He said that Muslims threw Molotov cocktails to burn Christian property.
The army searched Christian homes, looking for weapons, and found one rusty rifle in the home of the harassment victim. The police officer could was unable to fire the rifle, according to Coptic activist Mariam Ragy. Never-the-less, nine members of the victim's family were arrested and charged with possession of weapons.
Way TV said that their correspondent was stabbed by the mob while trying to cover the incident live in Kolosna.
Shafiq Botros, who comes from Kolosna, said the incident was a pre-planned attack by Salafists who came from outside the village and who were aided by local Muslims.
After several attempts to disperse the Muslim mob failed, the army fired teargas. A curfew was imposed on Kolosna Thursday night.
"We are fed up. Every few days an incident takes place between individuals such as this one, where a Coptic man was simply defending his wife and his honor against Muslims, turns into an attack on Christians," said activist Nabil Naggar. "We have to blame the policy of impunity adopted by the Army, which lets Muslims get away scot-free every time they attack Copts."
Tweet
Pope Shenouda Article