Thousands demonstrate on 'Friday of Retribution' 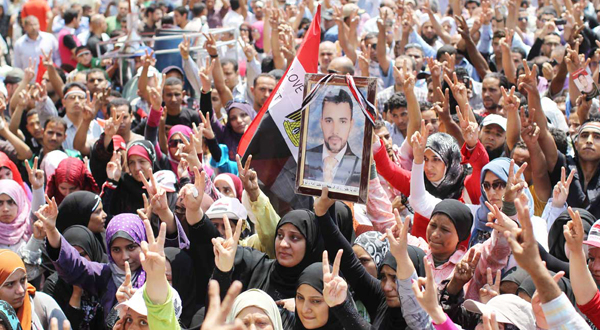 Over 1,000 were injured in clashes with police in and around Tahrir this week. Eyewitnesses and officials gave conflicting reports about how a protest by families of those killed in the January 25 Revolution turned violent. Many, however, criticized the police use of “excessive force” in dealing with protesters.
“Friday of Retribution and Loyalty to the Martyrs of the Revolution” began as citizens performed the Friday prayers in Tahrir Square, Cairo. Sheikh Mazhar Shahin, who gave the Friday sermon and led the prayers in Tahrir, called for speedier trials of those responsible for killing protesters as well as all security officials involved since Egypt’s uprising.
Similar demonstrations were reported in Alexandria and Suez.
Many protesters reiterated Mazhar’s demand of retribution against those responsible for the death of Egypt’s martyrs during and after the 18-day uprising, in addition to suspending the implicated police officers and releasing all detained protesters specifically those arrested on June 28.
Forty-nine protesters were arrested on June 28-29 and were detained for 15 days pending investigations by the military prosecution.
Protesters called for reforming all state media outlets, the resignation of Minister of Interior Mansour El-Essawy and the reform of Central Security Forces (CSF).
“I came to tell the government to take the proper decisions to reform all institutions and to implement all what we, citizens, want,” said Eissa Mahmoud, 24.
Sabah Tawfik, 50, owner of a contracting office Ekhnaton, had a different view. She said she shared the same concerns regarding the slow pace of decision making in Egypt, but was at the same time distrustful of the “revolutionary youth” who speak on behalf of the people in microphones and officials meetings.
“Look at them, they are quiet young. We need a visionary who can pressure the government well to undertake the proper reform,” she said, explaining that she lost all her money and was unable to pay her debts amid Egypt's economic recession.
At 4 pm, a group of protesters marched from the Omar Makram Mosque to the Cabinet building on Qasr El-Eini Street. A group demonstrated briefly outside the nearby ministry of interior headquarters, as both sides hurled rocks at each other. No injuries were reported in the minor clash.
As few tents were perched up in Tahrir in preparation for a sit-in, other protesters vowed to return on July 8, when mass protests were planned over a month ago.
“You all have to be there and tell the army that we are still here. We have to be one hand to save all the people who are detained,” shouted the mother of one of the army officers arrested on April 8 for protesting and who got a 10-year sentence.
“I met Field Marshal [Mohamed Hussein] Tantawi [head of the ruling military council], and he promised that he would let my son along with the 22 others out. I trusted him but until now my son is in prison,” she added.
“That’s why we all have to be there,” she said.
“Do not put Mubarak and his people on trial because of the money but for the sake of the martyrs,” cried the father of Mahmoud Khaled, who was killed during the uprising.
Mubarak is to stand trial on Aug. 3 on charges of corruption and ordering the killing of protesters.
Tweet
Pope Shenouda Article